The day started slowly. Gianluca had arrived in the wee hours, so we were all slowly getting up and about. Eventually, we went to Poblanou (a neighborhood) for a tapas and sangria lunch. Yum. Matt’s two Swedish colleagues, Marcus and Dan, joined us there. Matt stayed a while with them while the rest of us headed off for the festival.

* Alessandro Cortini (4:00 PM)
Moody atmospheric, an awesome way to take a siesta (after a big lunch, sitting in the lovely auditorium)

• Mueran Humanos (5:40 PM)
My favorite for the day, two Argentinians living in Berlin, making angry dark music. I bought a t-shirt and a CD at the merch stand (which is HELL to navigate), then we all took a break in the shade. 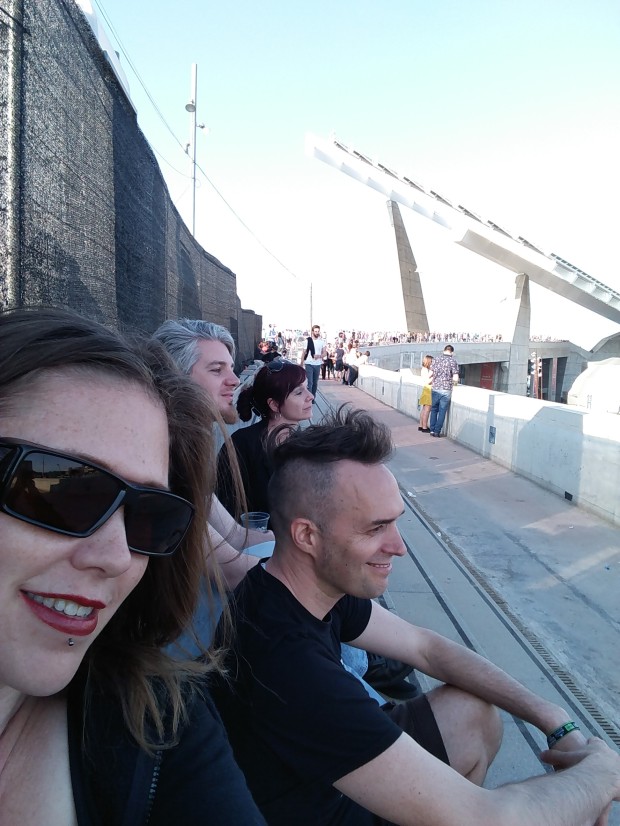 • BEAK> (7:30 PM)
One of the guys from Portishead. It was nice. We caught up with Dave finally (Liz and Steve were further forward in the audience), but it wasn’t really grabbing me, so I was happy to move on to see…

• Daughter (8:00 PM)
This was much poppier than I would usually listen to, but so charming and ethereal and decent lyrics and everything, that I may very well buy a CD later. The singer’s face was really enthralling to watch, and she can really sing. It’s really not my usual style, but I really liked it.

• El Último Vecino (9:00 PM)
We caught this in passing, and I would like to have a better listen. I liked the sounds enough that I jotted them down for later, but we were on our way from Air to Suuns, so just walked on by.

• Air (9:10 PM)
I don’t know this band at all, but the first song as we walked up sounded promising. Unfortunately, the next song made my soul hurt. I strongly suggested we head back towards the main area to catch Suuns, and I wasn’t alone in this.

• Suuns (9:35 PM)
From Montreal, pretty good, I have to say. I quite enjoyed it. Some songs more than others. Good energy, good everything. I will give them another listen at some point. 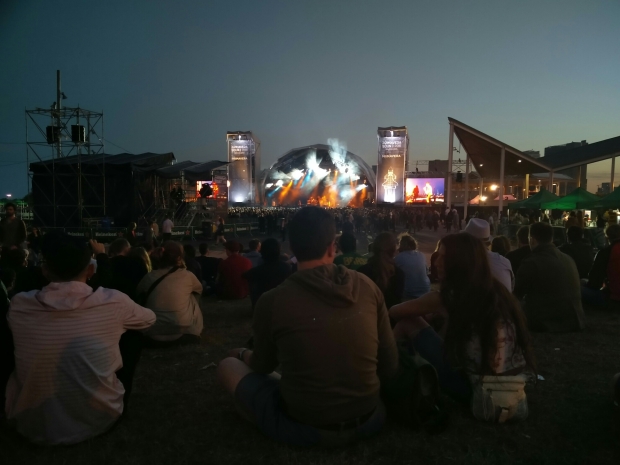 • Explosions In The Sky (10:20 PM)
Matt left with Liz, Steve and Dave to see Floating Points, which he later said was mostly not his thing, while I went with Deniz and Laura to see Explosions in the Sky, instrumental rock from Austin. It was excellent. I think we found Gianluca again at this point.

• John Carpenter (11:50 PM)
And this was really really excellent. John Carpenter was there, actually playing some of his compositions, with the films playing in the background. Really really good. All of us (minus the Swedes) were there together for this one, then Liz and Dave and Steve left for LCD Soundsystem and the rest of us took a little break before checking out miscellaneous things while we waited for a couple in particular later. 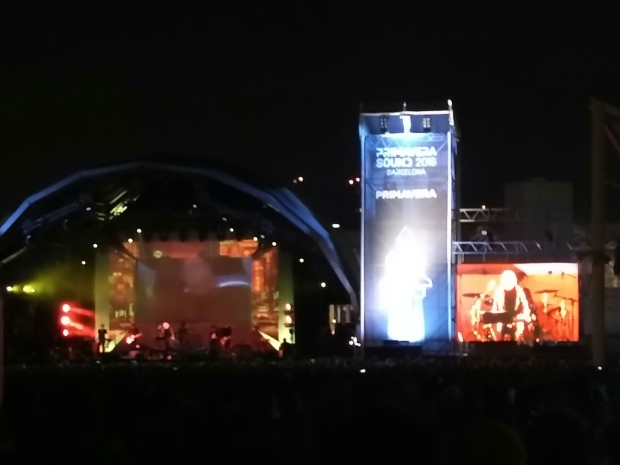 • Mbongwana Star (12:55 AM)
Excellent energy, a Congolese group, playing rock mixed with drumming and traditional rhythms. I really got into this, which was excellent energy set-up for…

• Thee Oh Sees (1:50 AM)
I may have been the only one of us who enjoyed this. I liked the faster, harder punk sounds and loved to watch the two drummers up there. The singer had really intense energy, but the drummers were fascinating. You never really saw the bassist from where I was at. Far side of the stage and the cameras almost never picked him up.

• Fasenuova (2:20 AM)
Rather disappointing. Industrial from Asturias, but pretty boring. We walked away.

• Battles (2:50 AM)
This was really interesting, but not what Deniz had expected from them, and Matt and Gian were asleep with their faces in their hands. I was really taken with how complicated the music seemed to be, and fascinated watching the guitarist. But alas – it was time to go.

We headed out for taxis, and Matt and Gian and I got home really quickly, but Laura and Deniz got unlucky, and didn’t make it for more than an hour. I don’t know what time the Swedes got home. They weren’t there when we got home, and only one has poked his head out of his room (in his whitey-tighty’s) while I’ve been working on this.