I’ve been delaying writing this post for 2 reasons. First, the photos from the day were almost entirely taken by the tour operator, so I need to sort them and choose a few to use. Second, and more importantly, I was still feeling that we had once again been irresponsible tourists.

The very first time Matt and I were in Thailand, I had researched a company specializing in personalized tours of hill tribe villages. I had worked for so long with Hmong colleagues and students in St. Paul, Minnesota, that I wanted to put together stories they’d told me about their families and villages in the mountains of SE Asia with reality. Unfortunately, although the company I chose was very good via email, the man who actually takes people on tours had other ideas. Before we set out into the hills, he took us to Tiger Kingdom and one of the big elephant parks near Chiang Mai. I had to speak to his wife on the phone and she had to convey more strongly to him our wishes before we could get out of tourist attractions.

At that park, in 2010 or whenever it was, there were lots of elephants, and you rode in big wooden contraptions on them. They rode a prescribed route through the nearby countryside, and probably did it more than once a day. Yes, we rode the elephants, and yes, it was fun. But I doubt it was a good environment for the elephants.

So this time, when Jennifer said she really wanted to visit elephants, I insisted that if we do that, she and Matt needed to actually research ethical elephant tourism. They did, and the sanctuary that they most wanted to visit was fully booked for the day. They did more research, and discovered another elephant “sanctuary” that was closer to town (only an hour or so drive) and said there was no riding of the elephants. I agreed to join them.

It was a really fun day. It’s true. There were only a few elephants, including a couple of babies. They were a family group without the bulls, because apparently the bulls are dangerous for the females sometimes (I’m just repeating what I was told there). The bulls are sometimes there as well, we are told.

There were 5 of us tourists. A father and daughter from Madrid, and the 3 of us. We were 2 to an elephant, so sometimes Jennifer was alone and sometimes I was. First we fed the elephants and learned about their individual backgrounds and personalities. 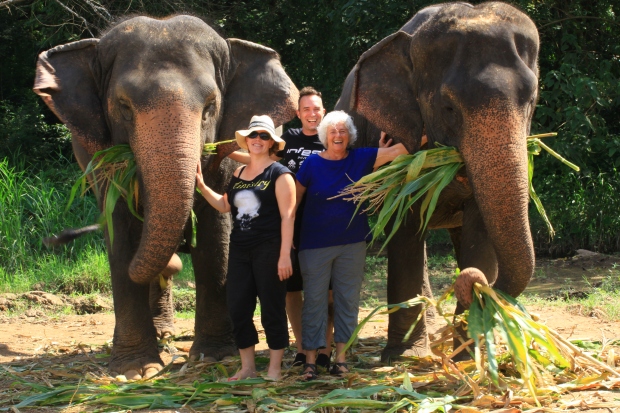 Then the mahouts took them into the river for a bath.

Then we learned some words for using with the elephants and had lunch.

Then we fed the elephants some sugar cane and practiced getting on and off of them. 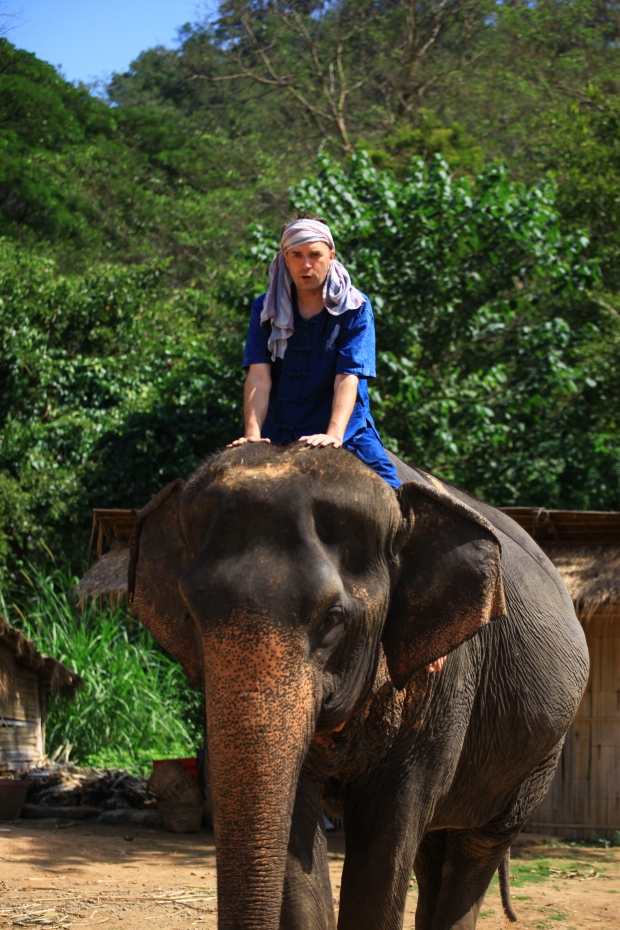 Then we rode them across the river and through the woods a very short way along a circular route.

Then we took a break while the elephants drank and played in the mud. Then we rode a bit further, back to the river, where we washed the elephants (and ourselves; we were really muddy). 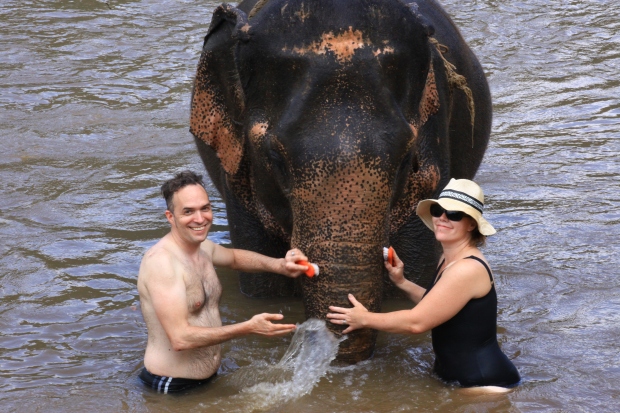 Then we rode back to the camp.

It wasn’t a lot of riding. Maybe a total through the whole day of less than 45 minutes on their backs. This was a full day program, so the elephants were not going to be doing it again that day. A lot of the day was spent posing for pictures for the photographer, who directed us constantly on where to stand and when to smile (yes, it was annoying). But they had in fact advertised no riding (to my knowledge, based on what Matt told me, although Jennifer had asked the hotel staff to make the arrangements, so who knows), and then we rode. Everyone was respectful and cautious. The elephant that Matt and I were on in the first part threw a little fit at a patch of brush, and trumpeted and trumpeted, refusing to move for a while. The mahouts told us that she frequently does that at that patch, but they didn’t use anything but words and guiding her by hand to try to move her along. They were calm and so we were calm.

We enjoyed learning the command words, too. And everyone at the camp seemed very amused when I pulled out bamboo sticky rice to share after the ride. 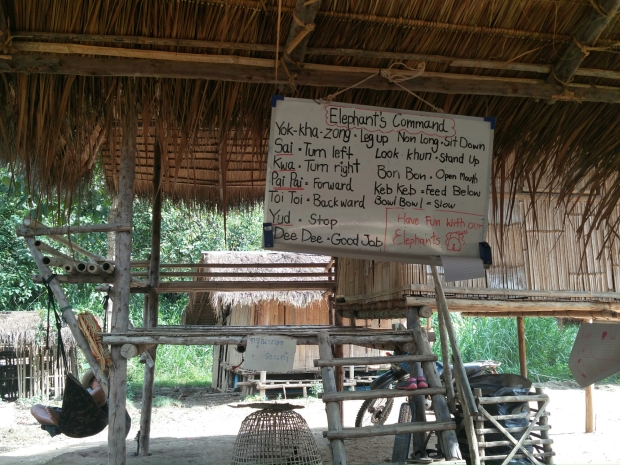