Actually, that’s a bit of a misnomer. Today I didn’t feel like I was learning the ropes so much as settling in, but that doesn’t have quite so nice a ring to it.

At my guesthouse, what would normally be a nuisance is turning out to be a boon. That is, the fact of my window being open onto the kitchen is becoming useful. My mornings are, by necessity, quite early. My alarm goes off at 06:30. I can take it easy until about 07:00, though, which might lead to falling back asleep. However, the kitchen starts getting noisy at 07:15 at the latest, leaving my best option to get moving and get out.

This morning I changed route to ITM just slightly, and found a lovely steamed bun place open on the way. This took so long, however, that I didn’t have time to eat it there, so I figured I would eat it when I got to school. 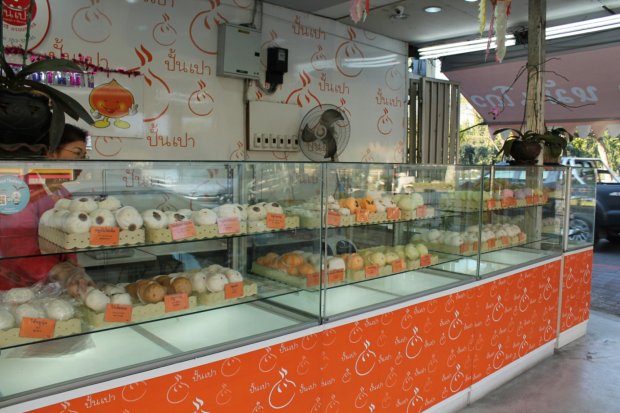 Then I passed a Wawee Coffee (Thai Starbucks), so picked up a small one, also to go. I was so happy to have discovered these options, however, that I made a slight error, failing to cross the road and the moat across from Wawee. Had I done so, I would have been right on track for ITM, but the way I went, I ended up circling all the way around to the first northern gate then doubling back to the corner to go north on the street I needed.

I was on time, but barely. No breakfast, then, until after morning mantra and warmup exercises. Oh well.

During our free practice hour, after the break, I discovered that I can remember the entire sequence without error. While the teachers corrected many others, who also needed their books, they merely nodded at me. Yay me. But to be fair, I’m the only one who has been practicing professionally already for a while. Everyone else is either a) learning it all in one big go now (doing class after class in one trip, so has only just begun), b) did it years ago but hasn’t used since, or c) did it years ago, but has only used it for friends, occasionally, and is now thinking of maybe more.

This was important for me to realize because yesterday, due to 2 strange factors, first that I speak Dutch and made the acquaintance of 2 Dutch artists who live in Antwerp (group C of list above), and second that I have a doppelganger, I ended up working with an obnoxious know-it-all Belgian guy of group A. When you are new but serious, you tend to learn everything as gospel. You don’t know that there are many ways to do the same thing (“same, same, different”). This guy is learning that now, in his first class with people who have longer-term experience. Although I’m the only one in class that has practiced Thai massage professionally for some time, there are several people in group C, and they, like I, learned from other teachers. Further, we learned from a different version of this school’s textbook. So yesterday, the teacher would say something like, “do level 1 stomach,” and I would do it. Belgian guy would get agitated and insist it was wrong. I would ask how he learned. He would explain, and I would say that I preferred my way (mine was more efficient, less moving around). He would become angry, call the teacher over. Teacher would see my method, say, “yes, that is another way, but too complicated for beginners, so you learned easier way,” which made Belgian guy angry. Then he would start expounding that he learned his way and this was the test way. Teacher would overhear, and say “no, both OK for test!”

The point is, yesterday made me feel constantly under attack. It happened over and over.

Today, I worked with a lovely young woman from Bermuda. Did you know that Bermuda is nowhere near the Caribbean, but actually much further north, basically on a level with South Carolina? Apparently its a very common misconception. This young woman is a professional masseuse and beautician, but otherwise falls into group A. She has previously only a beautician’s massage training, and is learning Thai massage for the first time, a whole bunch all in one go.

For lunch I joined my usual lunch group at the little family-run stand around the corner. Usual! Only the 2nd day! Anyway, it’s the Dutch artists, an Irish girl (also beautician/massage therapist) in level 1, and a Thai girl from Phuket, also level 1. Nice group, nice place. Super cheap: plate of food with rice and choice of 2 things from the daily selection, free water, plate of fruit, and cup of soup= 35 baht, or about 50 cents. Yesterday it was 42 baht.

After lunch I did my coloring homework in the school garden, where these are: 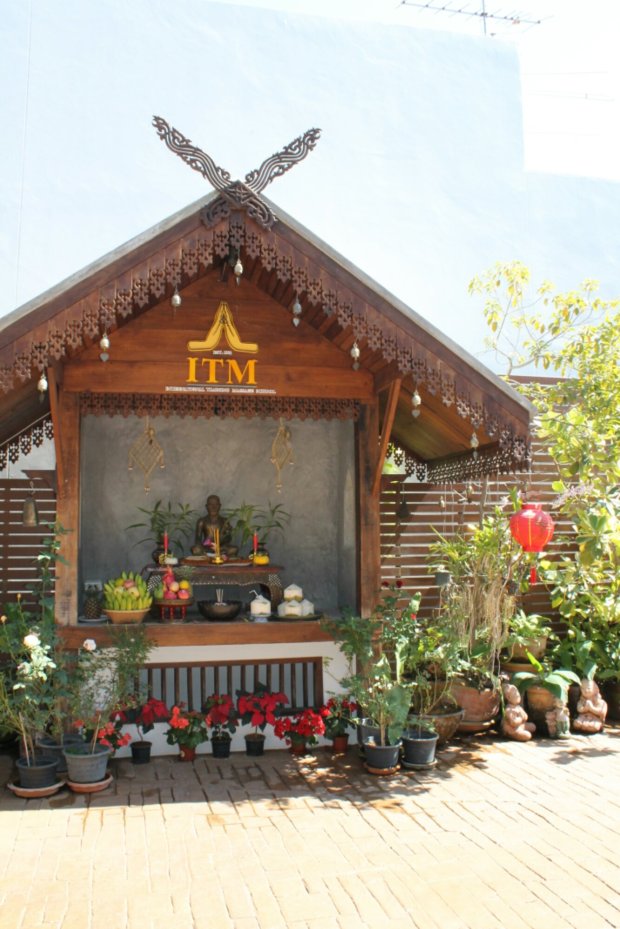 Side note: I’m confused. Where I’m sitting now, there are 2 separate tables of elderly tourists, on one either side. Both groups keep switching back and forth between Dutch and English. Weird.

Lessons end at 15:00 with student-led mantra then announcements. However, after that is more free practice time until 17:00. I made plans with the Irish girl to leave together after for dinner and more practice, but the practice room was full, so I ended up practicing upstairs with a level 1 Brazilian who lives in Australia, and I think the Irish didn’t know I was up there. She probably thought I ditched her, because I had just missed her when I came down to go. Oops.

Anyway, I walked back to the guest house, dropped my things off, and am now sitting in my 2nd cafe. At the first, I had a delicious pad siew, Matt’s favorite, although it had been made tourist-mild, so I had to add lots of chilies in vinegar, but I love chilies in vinegar, so that’s just fine.

Statues on a wat wall: 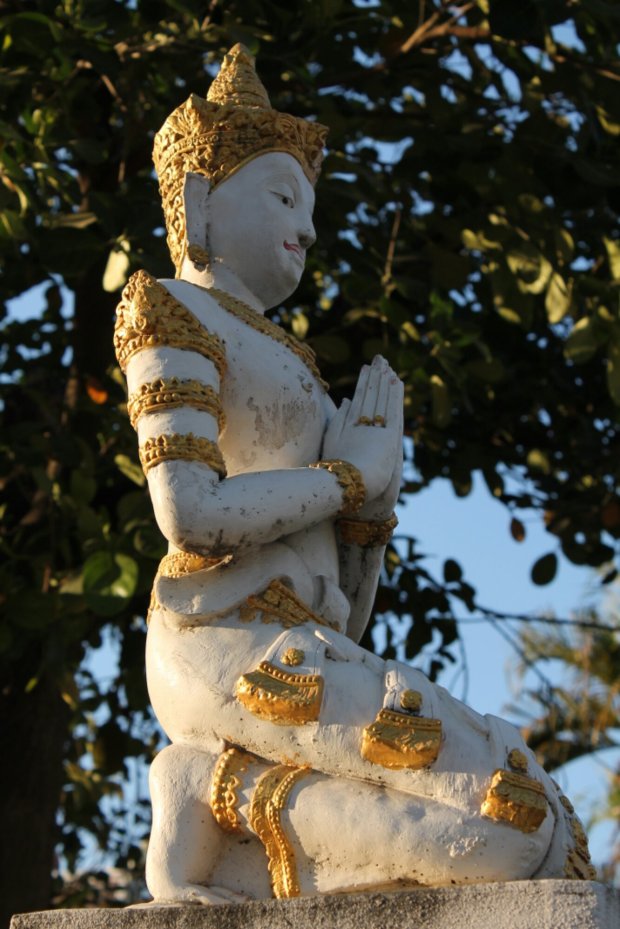 A man on the street stopped me to ask if I knew about the parade and fireworks tonight. Apparently it’s a two-in-one, a celebration for the boys being initiated as full monks, and the 350-year anniversary of Chiang Mai. Thai people are starting to crowd the street where I’m sitting, with cameras, so perhaps I’ve chanced upon just the right spot! I just have to wait another 45 minutes. That’s going to be the challenge. I’m sleepy!

Later:
Nope, it wasn’t tonight, but will be on the 14th. Good to know. I will plan on it. I had a nice walk instead. The city is so busy at night! I walked for as while with a québécoise man whose eye has been blackened during a scuffle in Bangkok. Nice guy, I think he would have liked to have as drink, but I wanted to head home for a little Ruesri Datton practice before bed.

On the subject of men, actually, an observation: I see a lot of foreign men with Thai partners, male or female, but very very few foreign women with Thai partners. Why is that? Many Thai men are quite good-looking, and many are tall. Many are tall AND good-looking. I spoke to a fine example of one of those this evening, in fact, which is why I started wondering. (Intelligence and good personality aren’t as visually apparent, but I’m sure they’re just as represented as in any other population.)

When we took our cooking lessons 3 years ago, the teacher’s ex-wife was English and current wife Chinese. So i know these matches also happen, but I’m just not seeing as much of it. Food for thought, as it were… Food. Hahaha. Bad joke. Sorry. Goodnight!