On the Wednesday that I had failed to get Michelin-star ramen, Matt had gone to the Google office. Through a series of mishaps of his own, he’d ending up losing the entire day in the office, only joining the rest of us for dinner that night. As a result, although Friday was starting out lovely and Mt. Fuji was starting to appear through the clouds, we took a relatively early bus departing for Shinjuku Station. 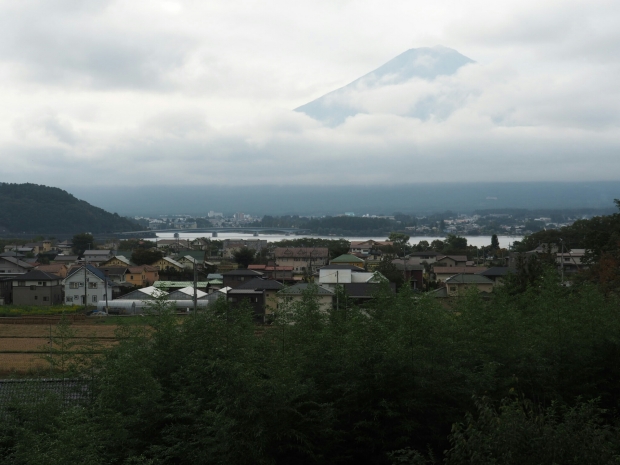 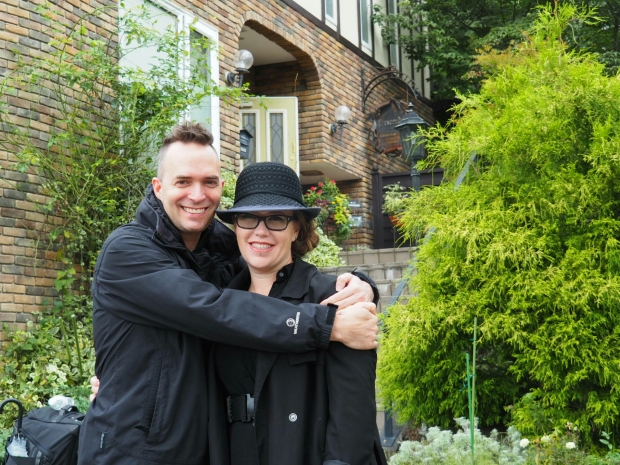 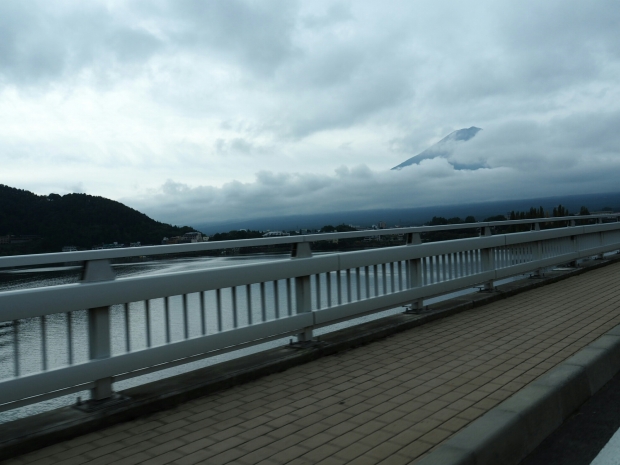 We arrived in the world’s largest station around noon, dropped our bags off at the hotel, where of course we briefly met up with Max & Guido, who had checked in there a few days before, then went for lunch. They’d had excellent sushi downstairs in the station, and were amazing at navigating it, so showed it to us before heading out for their own last day.
Lunch consumed, we went on the Matt shopping excursion he had hoped for the week before. A 7-floor men’s clothing mall was directly across from the station, so we started there. He tried on some things, and bought one. In one of the shops, which did indeed have some really cool stuff, the goth-boy clerk was so aggressive in his sales technique that I felt violently inclined. We got out of there without buying anything, and replenished our resources with coffee then a short visit in a shop with some very nice chilled out music. Music tames the aggravated savage beasts!

Walking up Cat Street, we enjoyed various shops and sites. I bought yet another hat. I’m not sure where exactly these pictures were taken, but are representative of a very full day. 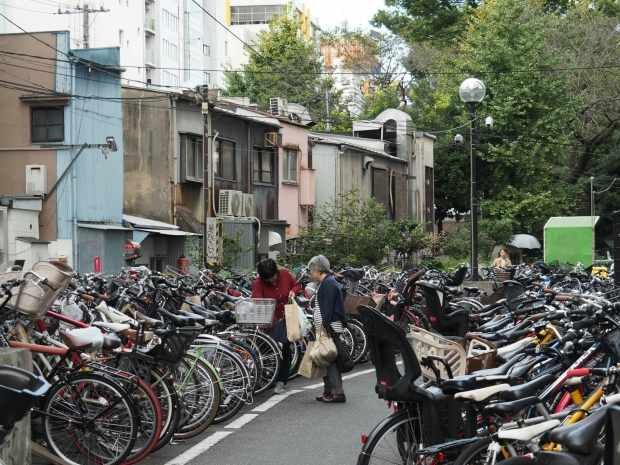 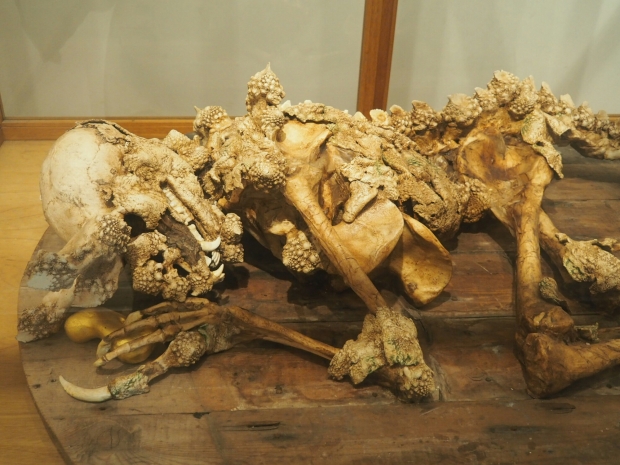 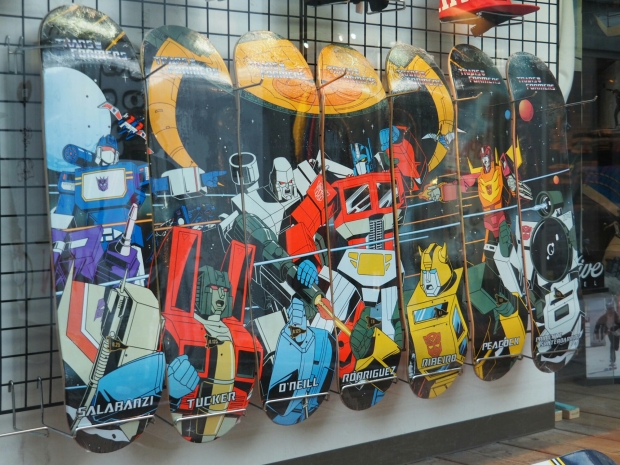 We ended up at the bottom of Harajuku, where the interesting designers we had noticed our first day were located. We enjoyed these shops more, and even found a gothic shop with original design items that we’d seen in a stand at the Dark Castle party. We had such a nice welcome in that shop – one of the store clerks had been one of the party’s DJs, and she was happy we had enjoyed ourselves so much. They took a picture of us in the store.

In the end, we had no choice but to walk up the horrible Harajuku shopping street to get to the Yamanote line. We walked it as quickly as possible, and were soon back in Shinjuku Station, where tunnels lead off everywhere but are so very hard to navigate. We needed to buy tickets for the next morning’s express train to Narita Airport, and were lost trying to find the correct ticket booth, but an elderly Japanese man came up to us and helped us find our way. Thank goodness for him, because I was getting rather frustrated with the fluorescent-light rat maze.

After a rest, the gang met up about half a kilometer away for dinner. We reserved a table at a gyoza (dumplings) specialty place and went to a basement punk bar to wait. 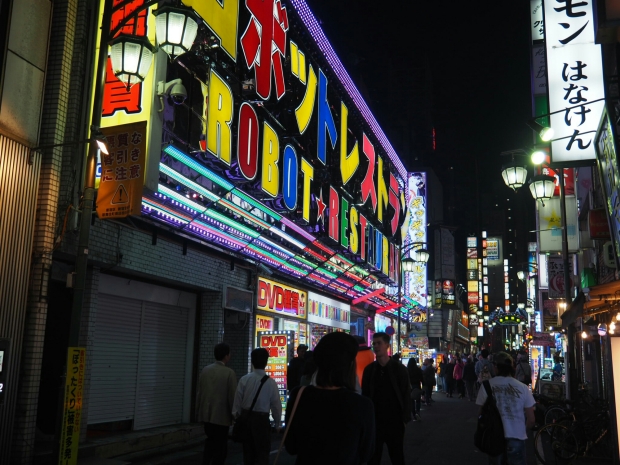 The bar was great. You order a drink then order your music. There’s a list of bands. You choose the band and she brings you the jewel cases to look at. You then choose the track. We had a great time, starting with Alien Sex Fiend, one of my personal favorites (Matt selected, the sweetie), which turns out to have quite impressed our awesome bartender. We had a good chat with her, and left just after some other tourists arrived with music tastes that didn’t really correspond to the music on selection. She looked a bit aggrieved at their selections, and we bid her farewell. 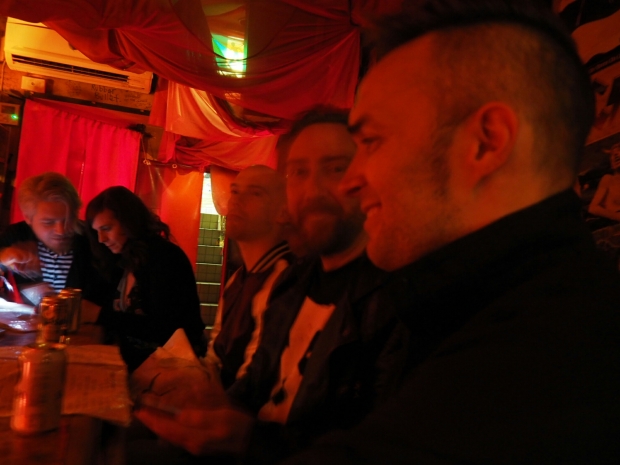 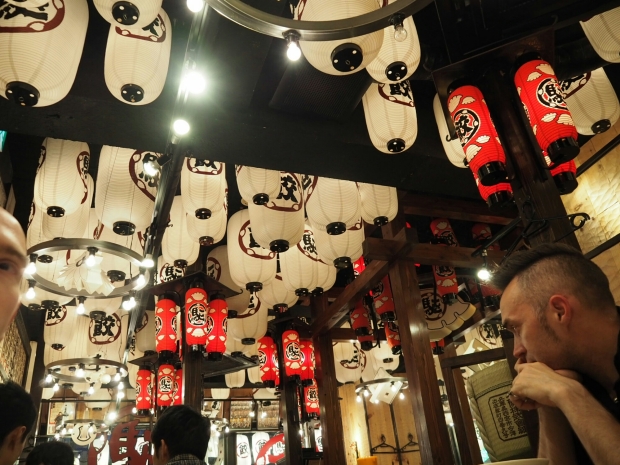 After the gyoza locusts hit: 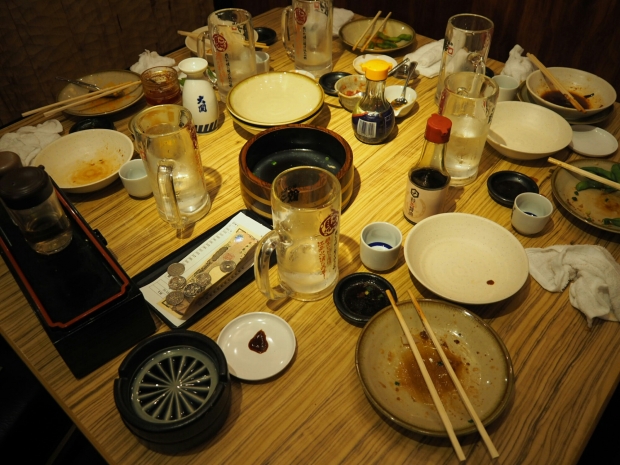 And after a quick walk around the neighborhood and goodbyes, it was bed time of the last night in Tokyo! Tomorrow: Chiang Mai!