This was one of the most spectacular gothic parties I’ve been to, and I’m so glad that Denis’ friend let us know about it in time!

On a main shopping street, a line of goths waited to have their IDs and reservations checked. We had a choice of a ticket with or without drink tickets, but we had to pay upstairs. There was good control and organisation of how the system worked, and next thing you knew we’d found ourselves upstairs in a restaurant decorated as a church, which was hosting the event (tables removed).

A band was playing as we entered, so after acquiring drinks, we stood to watch.

Laura and I shopped at some of the booths. There were some cute accessories of varying sorts and a pretty interesting leather worker (I thought Matt would like one of the belts, but it was too small).

They used an emcee (which I want to write “MC,” since it originates as Master of Ceremony, but apparently that’s not how it’s done these days). In the early stages, I thought this was great, because he helped ramp up energy between various performances while people danced to various DJs. By the end of the night, though, I was getting kind of annoyed, since it was sometimes the ruin of really good dance songs.

Some highlights: the entire audience screaming along to a cover of This is Halloween from Nightmare Before Christmas, while various members of various bands performed and camped it up onstage and on the catwalk.

Both pole-dancers were spectacular, although one only performed once, so I have no pictures of her.

I didn’t take many pictures of the burlesque performers, because it’s generally not acceptable to, and I’m well-trained. Others were, though. I was watching spellbound. The first was very witchy and cool, with an autumn theme of leaves and witchy music. The second was incredibly sexy and dark, in black and heavy black eye-makeup that was so cool when she’d bend over backwards and sway around looking at us upside down. 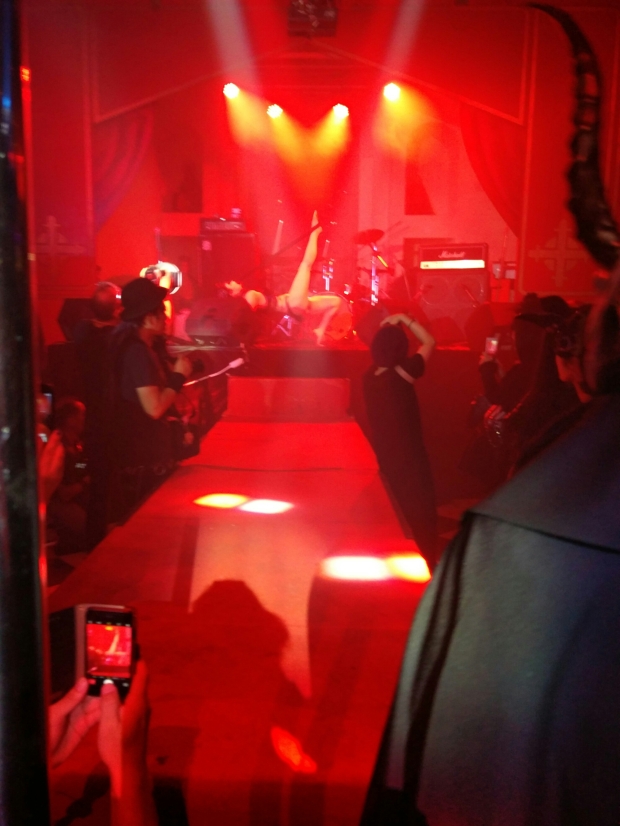 There were several bands of various levels of quality, and very different styles. 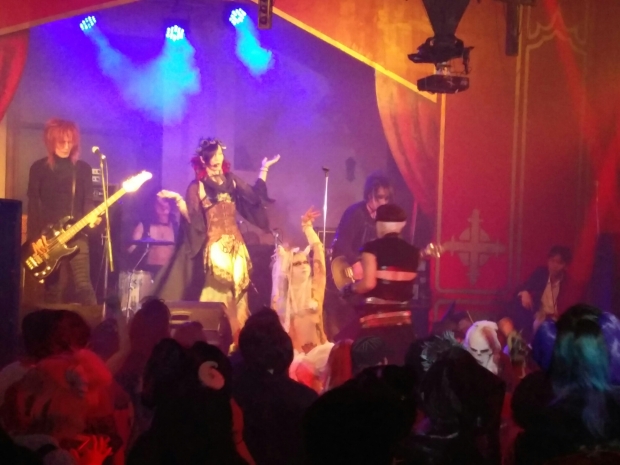 There were vendors on a raised area to the back, where Laura and I bought some small accessories and Matt and I chatted with the leather workers.

The bathrooms were stocked with everything you could possibly imagine you might need: tampons, pads, mouthwash, hand lotion… and a variety of other things I didn’t have a chance to identify. It was a dream! Plus they were all those fancy Japanese toilets with all the functions.

We danced, we talked to a couple of people Denis knew, and each other… we had a few drinks that magically didn’t ever make us drunk even though we could smell the alcohol in them. The shows and glam were astounding! What a great night! 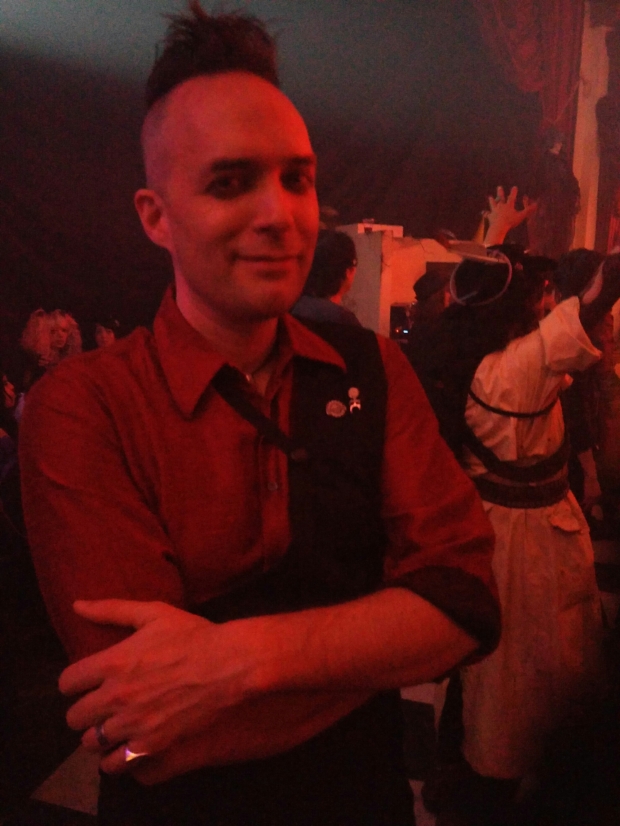 It was still dark as we left the venue, but already morning. The streets were packed with drunken revelers who couldn’t stand or walk. Vomit was on the sidewalks. A taxi waited, browsing his phone while his rear door stood open, one girl holding the door with one hand and patting her friend’s back with the other. Her friend, meanwhile, was crouching, kneeling on the ground vomiting. As we walked by, she slowly tumbled into a full sprawl and stayed there. We discussed helping, but decided that no one seemed to be treating it with any urgency, so continued towards our train.

When we stepped out at our station, it was daylight. There were still partiers in the street, but there were also people on their way to work.

We snuck quietly into our ryokan and went to bed at last! It was 06:30 Saturday morning.