Disclosure: Matt and I have lived in the Netherlands since February 2004, and I had not yet visited any of the Wadden Islands. Matt has, on a work team-building event, but doesn’t even remember which island, so I don’t think it counts.

We were talking about our summer thoughts, and upcoming trips like the one to Japan and Thailand in October, and Infest in Bradford in August, and I opened the calendar to a (drumroll) free weekend.

The political situation being what it is all over the globe, and the news always bad, I guess we were literally sticking our heads in the sand. It felt pretty OK for a weekend.

Our weekend began with a problem. Someone had superglued the lock to my gas tank. Of course, this is the sort of thing you only notice when you need gas, somewhere inconvenient. So we were about 45 minutes out of Amsterdam when we found out. It took about an hour to fix the problem (thanks to various helpers), and then we unfortunately hit each and every sailboat crossing on the way to our ferry. Then the ferry was delayed an hour, which meant that our hotel/restaurant would be closing as we arrived (both dinner and checkin in limbo).

It all worked out, though (this pic is actually the trip home).

Saturday morning we slept in until 10:30 and found our breakfast in a cute basket outside our door: fresh squeezed juice, yoghurt, boiled eggs, nectarines, mini croissants, several types of roll and bread, various spreads and sliced meats. We could have made 3 meals out of it. We made coffee with the in-room espresso machine and sat on our private terrace to eat. Before we were finished, around noon, the cleaners arrived to change things for us.

We left around 12:30, unfortunately just in time for Ame-siesta, so all the bicycle rental places were closed. Instead, we walked to the nearest point of interest (a fire tower). We walked around it, looked at the beach, and went to the pannekoek restaurant next door. As our pannekoek arrived (we weren’t very hungry, so we were sharing one), Matt’s coworker who sits right next to him all week long and his wife arrived. Hilarious. Everyone claimed they had no idea the others were going to be here. We had a nice lunch together, then Matt and I rented bicycles.

She had suggested that because the island is long and flat, the route “back” from wherever is windy and horrible, and I would probably enjoy an electrical-assist bike. I’ve never used one before, and it was wicked. Loved it. When the wind was really bad, Matt just grabbed onto me and we scooted right along. You have to pedal to make it work, but it really makes everything a breeze. My butt got sore, but nothing else.

Ameland is largely natural reserve: lots of dunes and virgin beach. It was gorgeous. We gave ourselves an assignment for the trip: look for round (spherical/cylindrical) forms in nature that might be reproducible in clay, specifically on the wheel. We were not very successful, but it was fun to have a project.

Matt touched jellyfish (after I did and showed him it wasn’t dangerous). They were beautiful. Some were entirely purple, and some were clear with 3 or 4 pink ring-like shapes inside them. We watched more and more arrive as the tide came in during the evening. 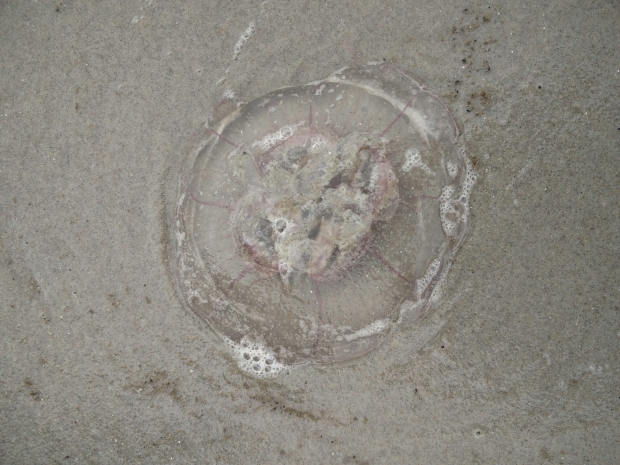 As a late snack, we ate a mixture of delicious treats at the “most sustainable beach pavilion in Nederland” or maybe in Ameland (there are only 3) before bicycling back against the wind 10 km. With the electrical assist.

When we were back, we took Zombie Fluxx into the hotel’s Mexican restaurant. Matt ate while we played and drank cocktails. Later, I ordered too, just before the kitchen closed.

Another morning, a bit earlier. Check out was only until 10:30, so we woke up at 08:30 to enjoy our breakfast, checked out, and took our bicycles for another ride. We spent some time on the beach, talking and talking, and getting a sunburn. Then we rode back, returned our rental bicycles, got our motorcycles packed up, drove to Buren, the village on the furthest side from us, had lunch, and caught the ferry back.