We are going backwards.

Actually, the idea today was to head to Lugo, in Galicia, but we were about a half hour into the ride when we pulled off to adjust Dick’s baggage and I remembered that we had reservations to see some caves tomorrow in Ribadasella. If we went all the way to Lugo, we’d have a 3 hour drive each way, all highway, just to see the caves. So we decided instead to take some coast roads, which we hadn’t done yet.

This is a weird picture, but it was a lovely little place just a short way from a wonderful little beach at Vega. We wanted to stay there, but the bungalows at the campsite were rather expensive. It’s expected to rain heavily, starting tomorrow, and we wanted to settle for 2 nights in order to explore the caves without luggage to worry about on our bikes.

If thunderstorms weren’t in the forecast, we totally would have camped at the nearby campsite.

Instead, we continued on, eventually arriving in Llanes, which is a small beach and port town a bit further west of there. The campsites didn’t have good prices on bungalows, but there were many hotels with triple occupancy rooms for cheaper than we paid previously for camping, so in the end we went ahead and took one.

Here are some views from Llanes: 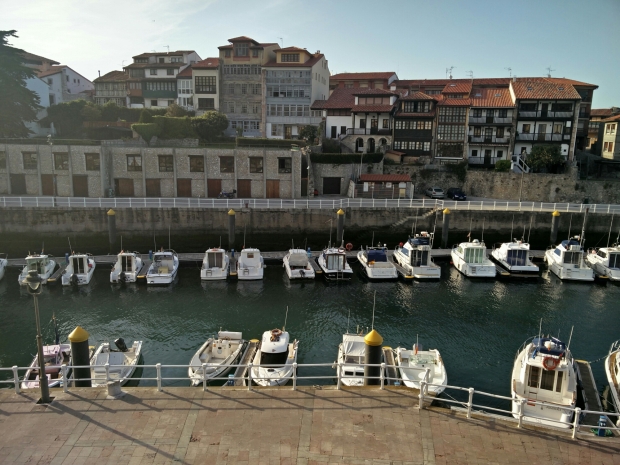 Both are basically outside our hotel, although we don’t face the harbour. We are instead on our own little terrace, with sun-bathing chairs and astro-turf, which Matt really wants to put to use.

It’s early, and I’m exhausted. Basically, a combination of things keep me up a lot in the night.

1. We eat a lot of heavy food no earlier than 20:00 (which is when kitchens open), which means my body gets its food energy rush later than is good for sleeping.

2. We drink with the meals, because wine comes with every meal, and the sugars in that either help keep me awake or sometimes wake me up in the middle of the night.

3. Although I’m having a great time, there’s a lot to organise during the day, and making sure my companions are also having fun makes me worry a little. I know I shouldn’t. But I do.

4. In the campsites, the Germans and Swiss tend to wake up and talk in normal voices quite early in the morning. The Spanish, conversely, stay up late doing the same. I wear earplugs, but sometimes people’s dogs come check out our tent, and even with earplugs, that wakes me up.

So – we’re in this hotel tonight, and I know that Dick is an early waker, and Matt is already asleep because he falls asleep so easily. It’s only 22:00, and I’m going to bed with a pretty uninteresting post today.

Still, it was gorgeous, as usual. 🙂