To be honest, I may have been over-ambitious today. I created a route intended to wind us around various roads and eventually, 4 or so hours later, bring us to some well-preserved and partially reconstructed Roman ruins. However, the roads were somewhat windier, we had a longer lunch stop than planned, and while everything was quite lovely, we didn’t get there until well after 18:00. It didn’t look like it had closed, just that it didn’t have the welcome and info center I expected.

Here are the sights from the road, though, and they were wonderful.
We started out with a Triple selfie at the campsite. 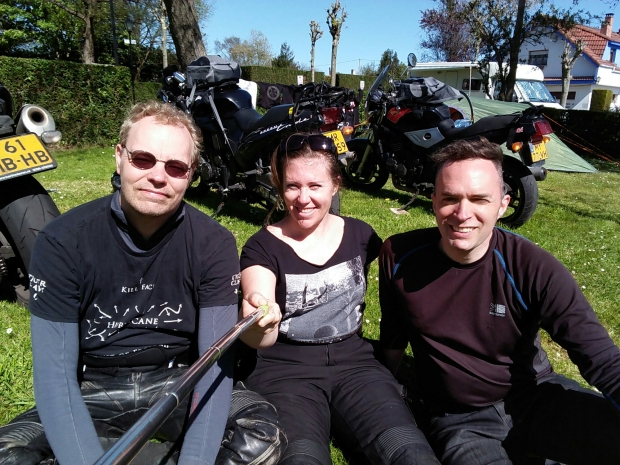 After a bit of easy winding roads through relatively populated areas, we found ourselves, surprise surprise, climbing up up up!

We have decided that it’s not our routes that are doing this; it’s just the country. Wow. This is a really beautiful place. Anyone still reading this is probably getting bored with the repetitive nature of this blog: “Oh look! Here we are at a beautiful vista overlooking mountains and a different sort of flora than 20 minutes ago…” “Oh look! Here we are at another beautiful vista overlooking mountains and a body of water and another different sort of flora and/or fauna than 20 minutes ago…” and on and on.

So we also stopped to admire a windfarm at the top of a group of hills. The roads here were spectacularly dangerous. Windy and narrow on ledges with steep drops on both sides, no barriers or railings most of the time. But we are going really slowly. After all, what’s the hurry? 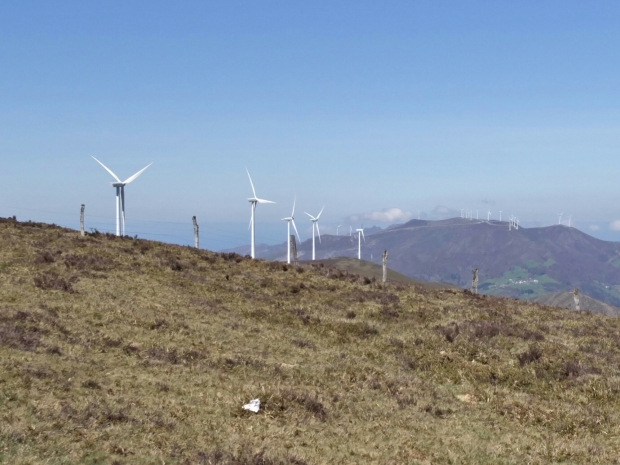 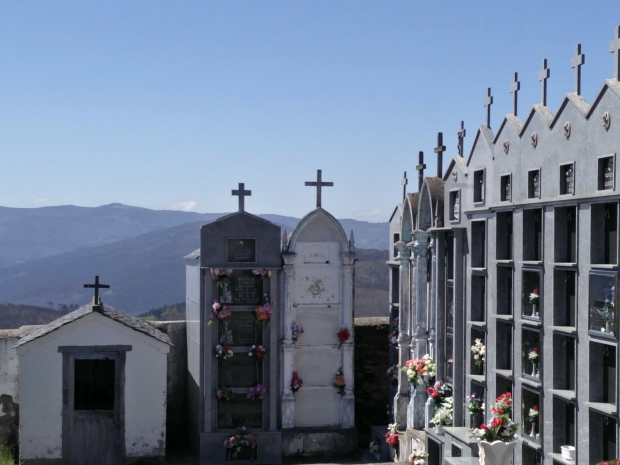 This graveyard was tiny (yes, not ancient) but at the top of these gorgeous hills as well. The gate was secured with a tied piece of twine, so I just opened it up, went in, took a picture, and fastened it again as I left. Matt didn’t like this as a stopping point, as there wasn’t any place to pull off the road. However, I noticed no one was driving these roads at more than a crawl, and it was in a pretty visible stretch.

Much later, our best find of the day. I spotted a little clearing by a waterfall and a building (I couldn’t see what from the road), and slowed way down to look for a pulling off spot. Indeed, such a spot existed, and we walked down a little path that crossed the river diversion of this old mill. The water went through the building, but the mill stone is where Dick is sitting in this photo. The waterfall was about 3 or maybe 4 meters tall, and is behind me around the bend. The pool was deep enough for a nice splash if it hadn’t been so cold, and we hung out there for probably 40 minutes, just relaxing.

After that was the failed attempt at the Roman ruins, then I got a little over tired. Matt took over the lead and we headed home via the highway, 40 minutes away. The whole day took 11:30- 20:00. We stopped at a supermarket on the way back to our campsite and are grilling right now.