The territory of the past couple of days has been completely different to the days before.

Where it was snow and sharp ravines, now it’s dry and clay-rich, with narrow roads winding through an entirely other sort of mountains.

We started the morning by dropping off luggage at our new guest house, mere meters from the hotel of the night before. Then we headed into Ponferrada to see the castle of the Knights Templar.

We could easily have spent almost all day there, but instead we left after a couple of hours to see the view over La Bierza from Corullon. La Bierza is the region. We picknicked at the viewpoint.

After Corullon, we went up up up and over, through a town called Sobrano, to another tiny town, Orellan, from which we could see the hills of Las Medulas, where ancient Romans mined gold.

We also went inside some of the water ways of the gold mining operation.

It was the end of the day, so we set a course for “home,” back in Molinaseca. Just off the route, I saw an interesting castle ruin, so turned off course to see it. The name was something like Castillo Cornuleto (I kept calling it Castle Cornetto in my head), and it’s not in my guidebook, but it’s quite awe-inspiring, perched atop its cliff. 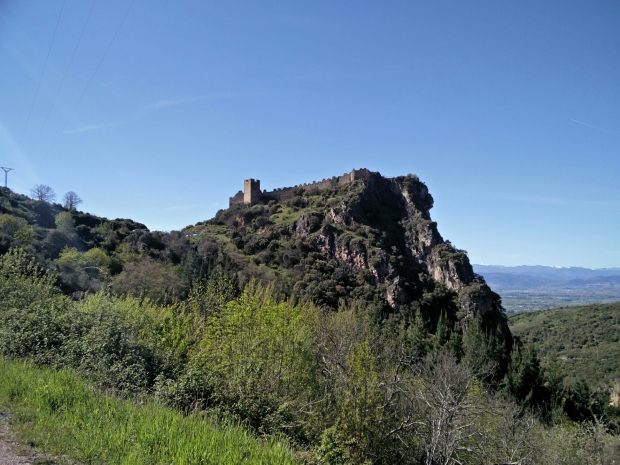 There was a crowd of people there, including a bunch of people dressed as Knights Templar. Everyone was cheering a bicycle race that was passing through. As it turned out, the Knights Templar people just visit different castles throughout the region, on the weekends, cosplaying. They unexpectedly coincided with the race, so were making the best of it. Matt joined in.

And afterwards, we were off. This is a less thought-out post because we spent the evening over beers with an American man on the Camino de Santiago. We’ve been on it for a couple of days ourselves, now. But before joining up with him, this was my meal, and it was scrumptious: fried eggs on top of generous slab of foie gras, sprinkled with truffle flakes, and under it all a huge portion of salted fried potatoes. Yum! Still very heavy, but at least this was the first meal where I had a break from solid meat meat meat!