Since crossing the border into Spain, we have encountered almost nothing but friendly people, pleasant roads, and beautiful scenery. Food is pretty cheap, and 3 course menus come with whole bottles of wine and if you’re friendly, with some digestif for after the meal.

I didn’t have the best of days today. We left Potes after a stressful exit of our hotel while fully loaded. It’s quite steep and some tight corners with rounded paving stones. My adrenaline was flying while we negotiated it.

After that, we had a lovely drive out of the Picos and down into Leon. When I figure out how to put accent marks onto things with this keyboard, I will fix it.

There were some lovely viewpoints.

When we crossed the border from Cantabria into Castillo y Leon, the road became immediately worse. A terrible red paving, with potholes, cracks, and bad edging. Lots of pebbles on the roads. I became very cautious, also because the roads were quite narrow, and there were cliffs to fly off of if not careful.

When we were hungry, we stopped by the side of the road and enjoyed the leftover cured meats and cheeses we’d had leftover from meals the day before. A Roman road paralleled this route, so Matt went to have a look at it. He came back before I could catch up. “Ah, it’s a Roman road,” he said. “Once you’ve seen one…” 😉

We passed through Leon on the outskirts, then onward and stopped near the Cathedral at Astorga. We were interested in having a look at the Bishop’s Palace, across from it, designed by Gaudi, because apparently after the expense of building it, no subsequent bishops ever lived in it, out of embarrassment. 🙂 But we didn’t, because we were both feeling a lack of interest at that exact moment.

From there, however, we joined up with the Camino de Santiago, which we followed for the rest of the day. 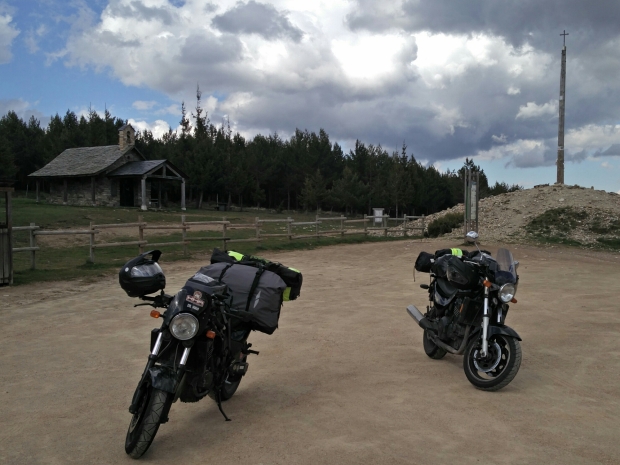 This town was on the way down the hill, and this road was part of the HIGHWAY. There was a tour bus parked along it. This isn’t the most representative picture, since some of the buildings actually overhung the street, but it’s where we briefly stopped.

At the end of the day, we finished here, in Molinaseca, but had trouble finding a hotel. We ended up in the most expensive in town, because we were exhausted. Actually, it’s neither that expensive nor that nice, but it’s nice enough that we inquired about tomorrow night, since we had hoped to use this town as a base for a couple of nights. Unfortunately, there will be a wedding here tomorrow, so they are booked up.

We went out for dinner and a stroll through the town. 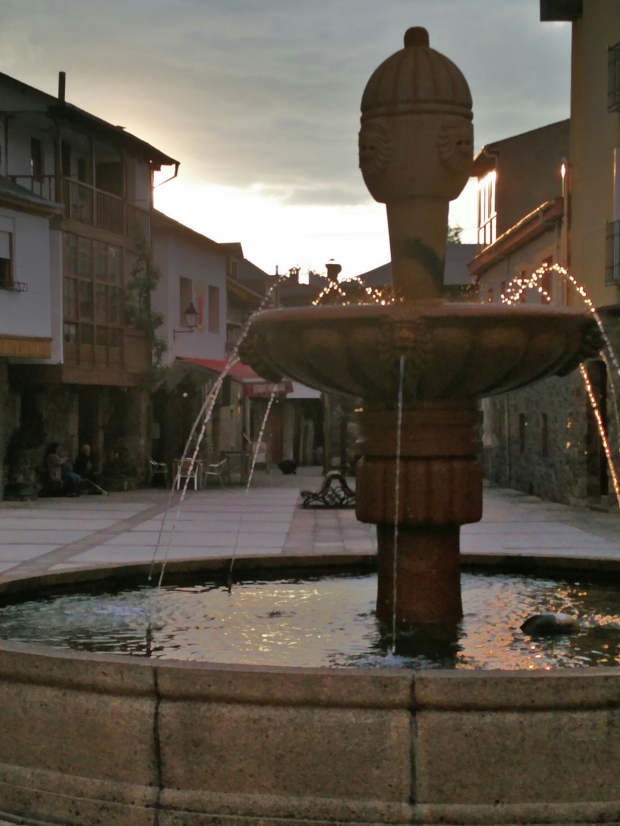 The restaurant where we ate was touristic but we had a lot of fun chatting with the waiter, in English and in Spanish. His English is better than my Spanish, but not by all that much, so we went back and forth. In the end, we were the last people there, and he brought us huge glasses of herbal liqueur on the house.

On the way back, we stopped at the hotel nearest the one we’re at and asked about tomorrow night. They have one room free tomorrow. So we’re booked there, and can drop off our luggage tomorrow. I had to ask that man to talk a lot slower, because he was so enthusiastic he started telling me all kinds of things at super speeds! He was so jolly about everything, though, that Matt insists he now needs to learn Spanish. 😀 Matt says that everywhere we travel.