15 Oct 2017. Remember the blaring music of last night? Well, it started again at 05:30, even louder than I’d remembered it from the night before. I put in my earplugs and it was still loud, but I managed to fall asleep anyway. I must be the only one of us with earplugs, because I was the last to get out onto the deck around 08:15. There, I learned that it’s a local temple. Damn temples! It sounded like pop music, but it was apparently spiritual music. And it was loud enough that I left my earplugs in until well after breakfast, when we finally pulled far enough away and returned to our original dock with the flooded pathway.

After navigating the treacherous stepping stones safely, we got into a car we’d planned the day before, and took the fast route to Fort Cochin, in Kochi. Everyone wanted a hot shower and a rest after 2 nights of cold ones and less-than-ideal conditions.

Unfortunately, our rooms were not quite ready for us, since we were in so early. We parked our bags and went nearby for lunch. The hotel was lovely, though. Of a similar style to Les Hibiscus, The Old Courtyard wasn’t quite as nice, but had a lot of charm. It was perfectly clean, though. I loved our room, even if our bed was actually two beds pushed next to each other with a rather large gap in between caused by the wooden frame.

Matt and I took a tuktuk to see the Kerala Folklore Museum, which was amazingly interesting. The building itself had been made by cobbling together architectural details from four other traditional buildings. Every room was absolutely stuffed full of artifacts, all of which were labeled with varying degrees of information. 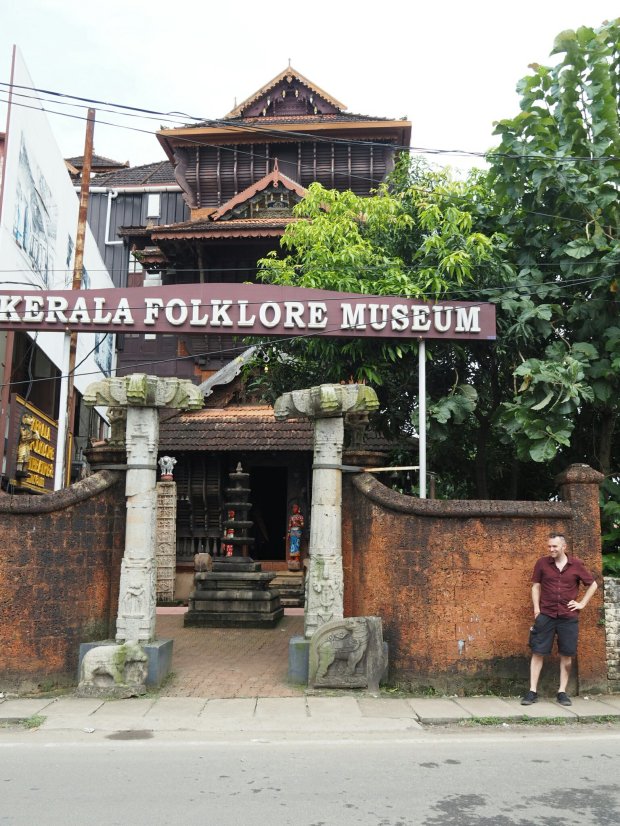 The staff were very knowledgeable, and happy to answer questions in more detail than I would have thought to ask them. One woman went so far as to pull out various artifacts from behind others, to line them up as they should be used, and explain how they fit into place among some of the other displays in the room.

If I’d known that Tamil Nadu had a puppet tradition, I would have gone well out of my way to find a performance while we were there. The puppets on display were all from Tamil Nadu. 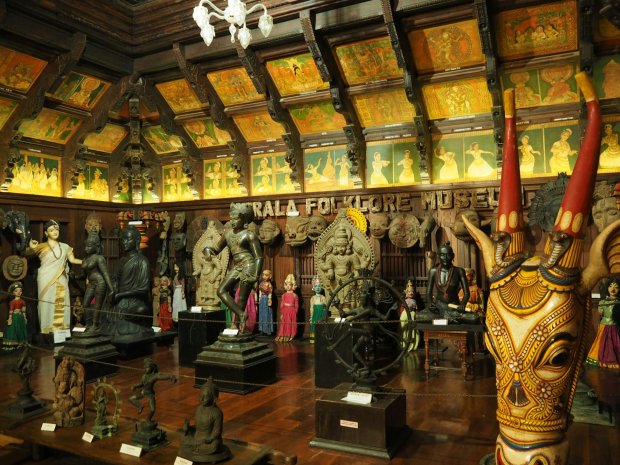 The tuktuk drivers are really aggressive as touts here in this town. They are really relentless in their insistence on taking you to shops where they get a commission. We had to say NO increasingly firmly, and we lied about our destination just to get out where we wanted without it becoming another problem. We did go into one such stop, but on our own volition because the courtyard was so pretty.

I’m actually glad it was Sunday and that many of the shops were closed. It gave us a chance to really enjoy exploring the streets and appreciating the very different houses in this town. They are often tall and narrow, and I wonder if that’s because there was a large Dutch influence here. 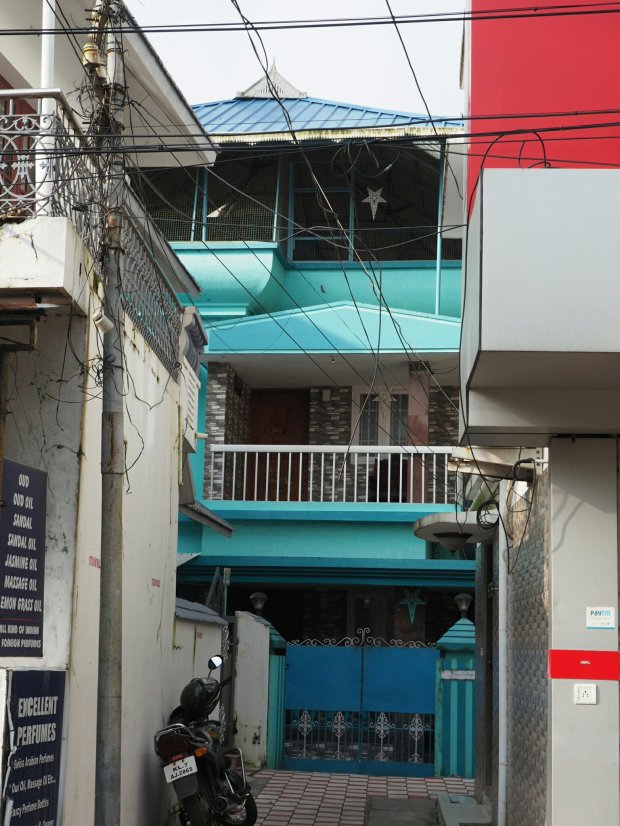 This one is a Syrian church. The architecture reminds me of Auroville.

After a wander, I did a tiny bit of shopping while Matt had a short rest in the hotel, then we went to see the Chinese fishing nets. In this scene, you can also see a man wading into the water fishing with only string, no pole.

Then we met up with Abbie and Derek at the cultural center to see a performance of Kathakali dance. It was amazing. First they explained the makeup, then did a demonstration of how eye and tiny facial muscle movements express detailed emotions.

Then they explained and demonstrated the use of mudras, which are gestures using hands but also whole bodies. It is a bit like sign language, and reminiscent especially of sign language used for trading purposes, such as that used by Native American cultures. 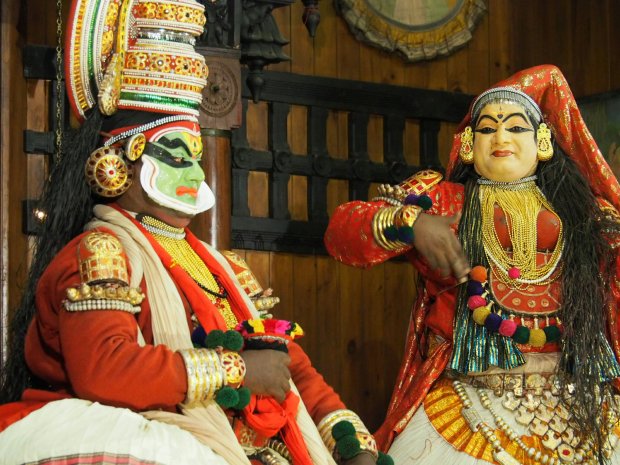 After several gestural concepts were demonstrated, we were ready for the performance. Accompanied by a singer and two drummers, and assisted by two additional stage hands, three actors performed a story about a search for beautiful flowers interrupted by an encounter with the monkey god Hanuman. I took only a few pictures because I was too busy interpreting the gestures. It was riveting. 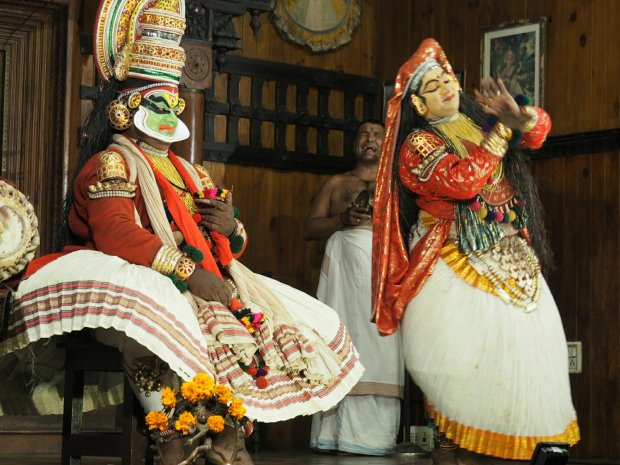 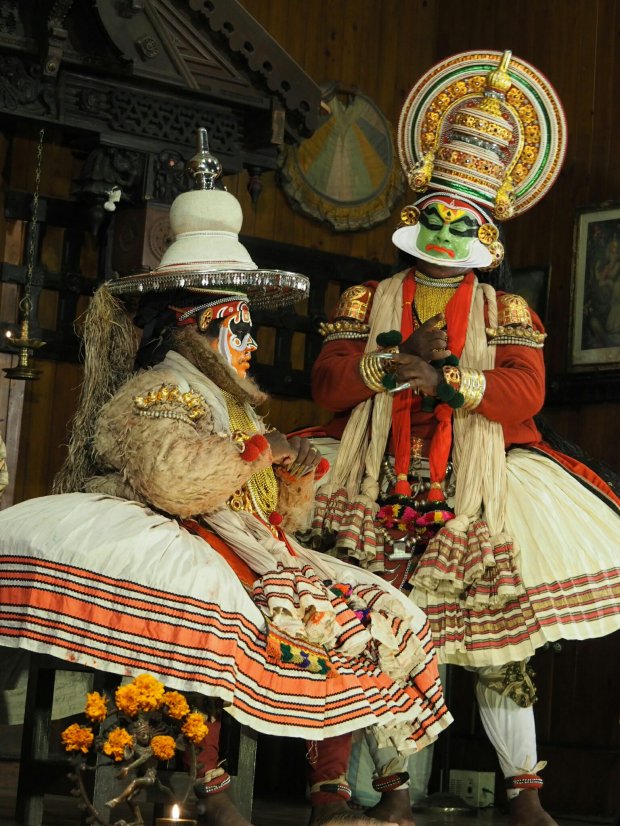 We finished the night with lime sodas and dinner at a mediocre restaurant where only my dish, a curried calamari dish, was excellent. We have become very fond of lime soda.