13 Oct 2017, Friday. We had a nice and reasonable start to the day on Friday the 13th, enjoying the hotel breakfast then making use of the hotel’s 24-hours from check-in policy. I went out to find a few things I needed while Matt relaxed. I came back with a box of sweets that made the hotel staff laugh. Apparently, Madurai is famous for its milk halvas. Yes, my lactose intolerance is a problem. Yes, I’m suffering for my sweet tooth. Lactase tablets will only get you so far.

Matt and Abbie went out while Derek and I researched hotels and transportation. Derek is rocking the transportation planning, and I found us a nice way to end the trip, which I think you’ll find out in a few days.

Finally, at 14:00 we checked out. We left our luggage in the lobby and went for lunch at one of the small places around the corner, across from the train station. It was delicious, of course. Nearly everything is. We also shared a fresh paratha at this street stall.

After lunch it was time to get over to the station. Derek had managed not only to figure out the train tickets online (quite a feat if you’ve never looked at the SEVERAL national rail websites), but also to order food for train delivery.

I admit that I thought we were traveling 1st class, so when we found our seats, and I saw that I was supposed to climb into an upper bunk that was definitely not clean, I had a few moments of panic. Luckily, Abbie didn’t mind that we use the seats of the lower bunk instead, and she was willing to climb into it later (I did find a train employee to bring us a fresh sheet set) when she was ready to sleep. Abbie is very gracious. Thank goodness. I was nauseous enough sitting.

Here’s everyone sitting in the quad of bunks where Derek’s was located. Matt’s was in the next quad over, and Abbie and I were in a two-seater across from Derek. 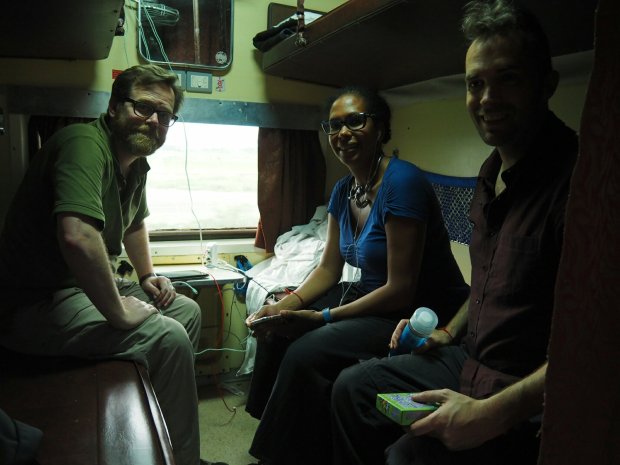 It was a difficult night. I think Abbie and Matt each slept a little, but two of the other guys in Derek’s quad were HEAVY snorers, so Derek didn’t get any rest even with earbuds in, and I wasn’t able to sleep because I was either coughing (yes, I’m in the final chest-cough stages of this damn cold I’ve had since Marrakech) or nauseous.

We arrived in Allepey, on the southwestern side of the subcontinent, around 03:00. Our promised transport was not there (that’s 3 for 3 of arranged transports not showing up), so we climbed into two tuktuks and went to our guest house.

Our room was filthy, which did NOT improve my mood. I learned the next day that although they used to have a washing machine, it had broken, and they’d been (like nearly everyone else in the villages), handwashing in the muddy river. So our sheets were brown and stained and full of holes, and they smelled rank as well. The shower was cold, and the floors were filthy. I felt like I got even dirtier. I didn’t sleep well.