11 Oct 2017. We tried to revolt against temples, we really did. After yesterday, we didn’t really want to see anymore temples, or at least to visit them in detail. Matt and I slept late, missing the buffet breakfast, then took a tuktuk to a coffee shop that supposedly had wifi, where we breakfasted and enjoyed some internet time.

We hailed another tuktuk to return to the bazaar area. It was a busy area of streets surrounding the rock temple (more soon), dominated by “India’s largest textile showroom.” Here is a view of it from above, which we took later. 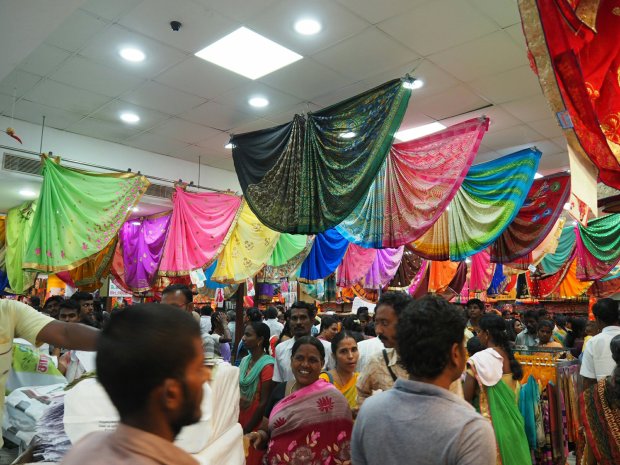 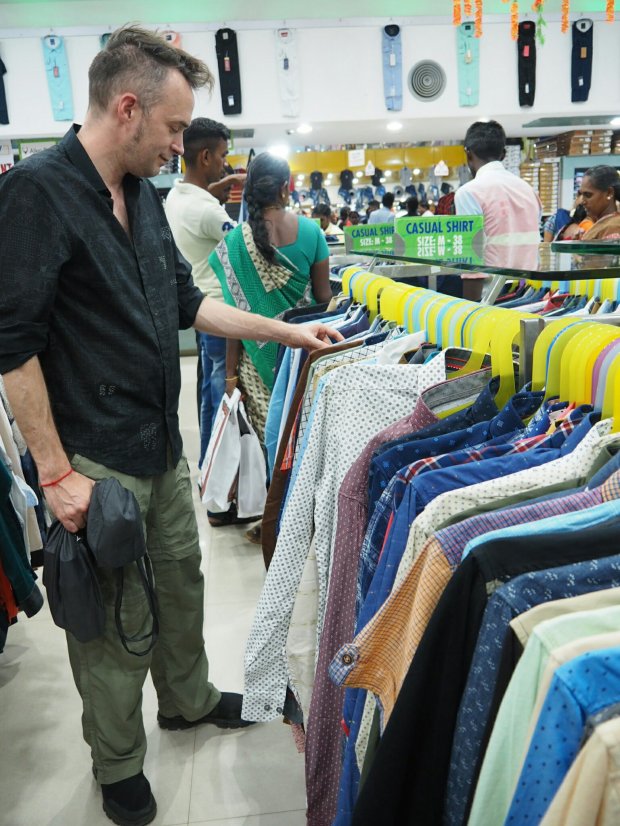 Most of the wares on the street were tat, or normal household wares that we didn’t have any interest in. We suddenly found ourselves at the entrance to the temple. The very temple we’d said we weren’t going to visit. But hey. It wasn’t very hot, and there wasn’t much else to do, so we headed up. 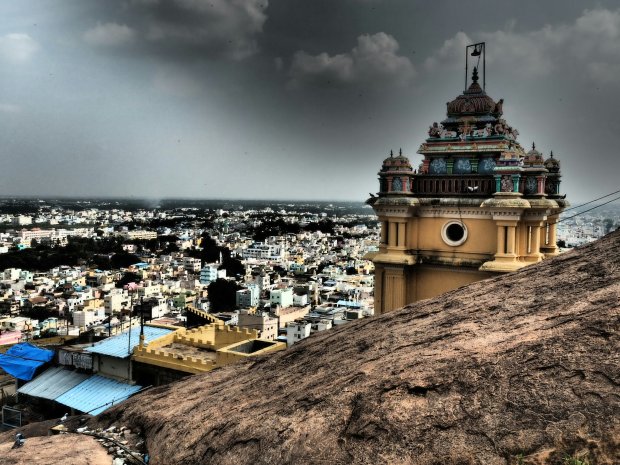 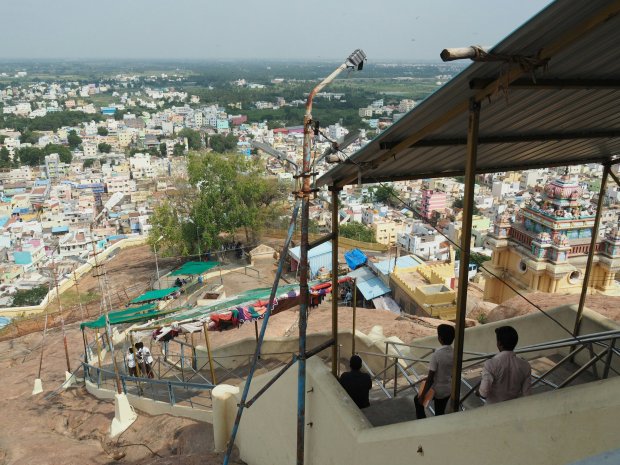 It was early afternoon, so the inner temple itself wasn’t open. Many people were napping and sitting to chat and rest in the shade along the steps. Anytime we stopped (at the top to take in the view or on the way down after buying some water at the snack shop), people wanted to chat with us and take selfies. It was a pleasant afternoon just chilling with other people from the area.

The friezes and sculptures in and around the temples tell stories, and I realize more and more often that I know some of them. It’s been years since I read the Bhagavad Gita or any other classic of India history, religion or myth, but one of my yoga teachers tells tales at the beginning of his classes, and sometimes I see them in the artwork. I would share this one, but I’m missing some of the key details, so I’m embarrassed and won’t. Maybe I’ll come back and edit this post when I find out. Then again, maybe I won’t.

On the way back, we got into a tuktuk with the most amazing driver yet. He wanted to get us to the hotel without going the long way around, so just went against traffic the whole distance instead, horn blaring!! Most of the time, things were too chaotic to snap a picture, so this is the only one I got.

We met up again with Abbie and Derek for some pool time, just in time for the monsoon to hit. Monsoon season, which we are at the end of, is a windy season. The winds come in strong and suddenly, bringing the rains. Abbie and Derek went inside, but Matt and I enjoyed a swim in the pool with torrents of rain coming down on our heads. If I floated on my back and stuck my hands in the air like sails, I could sail around the pool. I sailed around Matt while he sang an interpretation of Nick Cave’s “The Ship Song:” “come sail your Sharons around me…”

After swimming, we went back upstairs and cleaned up. Soon enough, everyone was ready to meet up for dinner, so we braved the rains (which were lighter anyway) and walked out into the night to find a restaurant recommended by the guidebook. It was delicious, and I discovered that paneer butter masala here in southern India is not at all the creamy thing served in Amsterdam or Minneapolis or other places I have been. It was spicy and rich and deep in color, with whole chunks of cinnamon in it. I’m also getting much better at one-handed tearing of breads, as well as just scooping up messes of sauce and rice with the fingertips of my right hand. All restaurants have hand-washing stations for before and after your meal.

I raided the sweet shop at the front of the restaurant, and we sampled several different things that looked good to me. I think our waiter was amused.

A few doors down from the restaurant was the Nice Bar, so we went past the uniformed guard to the 3rd floor, and a dark but not too dismal eyrie of iniquity. There you can consume spirits and tobacco. Matt and Derek had “strong” Kingfisher (8%), and I tried the wine, no further description available. It turned out to be sweetened and spiced, and not at all bad. Abbie wasn’t feeling like a drink. They brought out a ton of snacks for us, all complimentary, but we were all so full from dinner. 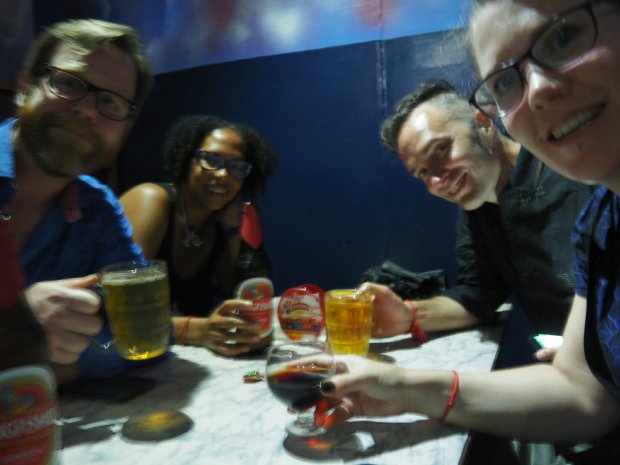 As has become customary, it was an early night. I arranged our transport to Madurai for the next day, and we all went to our bedrooms. Matt & I connected to our bluetooth speaker man (a little thing I picked up on a recent ferry trip to England) and had a little taste of home right in our room, listening to great music and laughing a lot.