7 Oct 2017. On our first real morning in India (because airports don’t count), we lugged our bags down the colorful stairs, deposited them with the travel agent next door, and breakfasted across the street. A different driver than expected greeted us when we were ready, and we set off. Because I unfortunately suffer from carsickness, I get to enjoy the front seat. This also means negotiating with the driver and sometimes translating (trying to get used to someone’s accent and resay the exact same thing). But it’s fun, because I get to look out the window, which is really necessary since the carsickness makes it impossible to sleep or read. Even though our entire reason for going to Mamallapuram was for the Tiger Cave (the town is otherwise known for its stone carvers, and we did see many representations of this), the timeline just didn’t allow it. 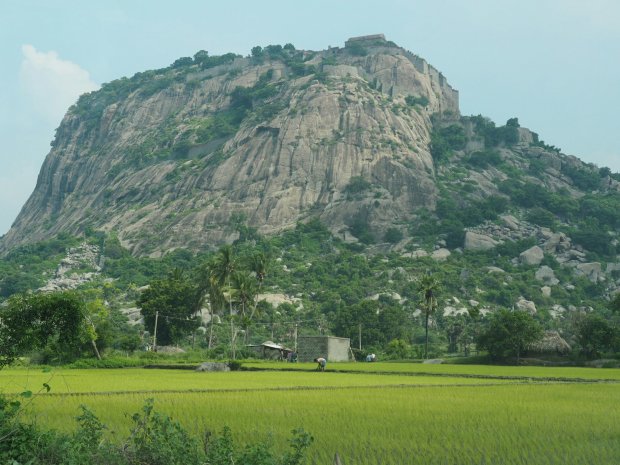 Fort Gingee from the road, very imposing. Our driver is from this area. He was also an excellent driver, a perfect combination of aggressive and cautious, avoiding all bumps and discomfort while honking his horn and overtaking almost everyone. The drive to Tiruvannamalai was about 3 hours, and Hindu temples close at 12/12:30 until 15/15:30. We got there in plenty of time. 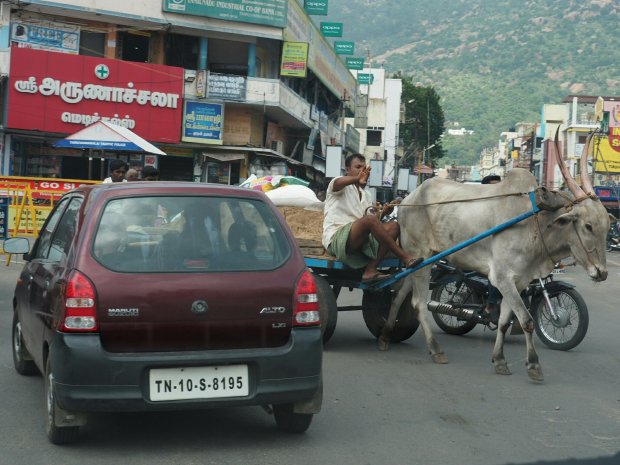 Roads have all kinds of traffic. 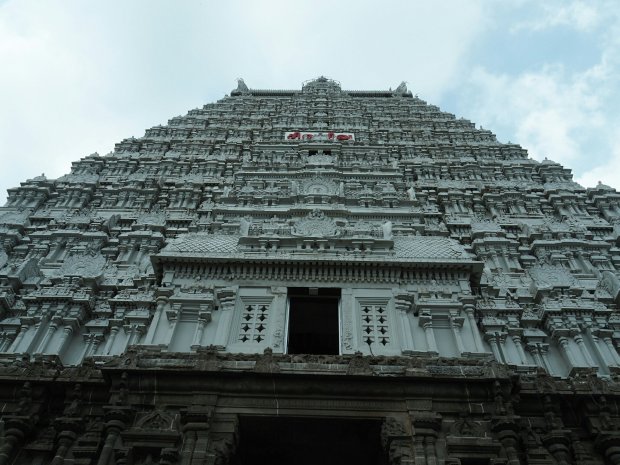 As tourists, we are only allowed in part of the temple, the entryway. Like with many other temples from other faiths we have visited, shoulders and knees must be covered, and shoes removed. In this case, cameras are additionally forbidden, so we only have the outside of the complex. Within the complex, we were allowed to a certain point, but afterwards you must be Hindu. Abbie is actually officially Hindu, but has no proof and really knows nothing of it, so although it was tempting to try and get her in, it wasn’t very practical. 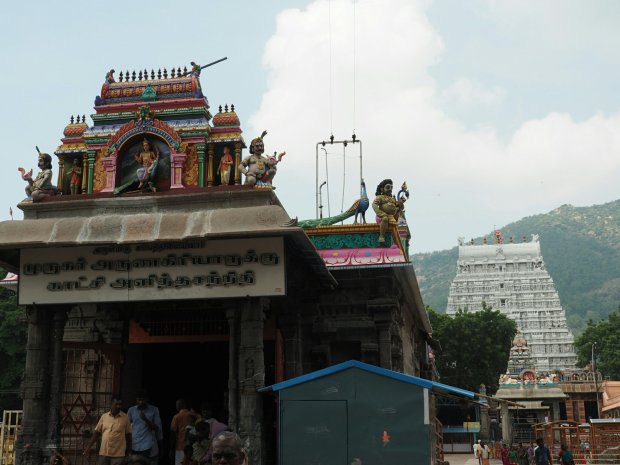 We did pay money to the elephant, who blessed Abbie by tapping her on the head, but apparently my donation was insufficient (I only had 2 rupees on me at the time). We also received blessings at the lingam of Sri Maharsi. I thought lingam was the word for penis, a fertility representation, but I must have remembered wrong, because it was not. We were directed into a basement, where we made donations, and a red bracelet was first wrapped around our right wrists then sealed with white powder that was subsequently placed at our 3rd eye. Unlike the red bracelets I’m used to in SE Asia, this one is red woven nylon, like a shoelace. I’m not sure how long it will take to fall off on its own. Quite a while, I imagine. Our driver’s boss told me that this temple at Tiruvannamalai is a temple to a fire Shiva, in contrast to another one we hope to see later, to a dancing Shiva. 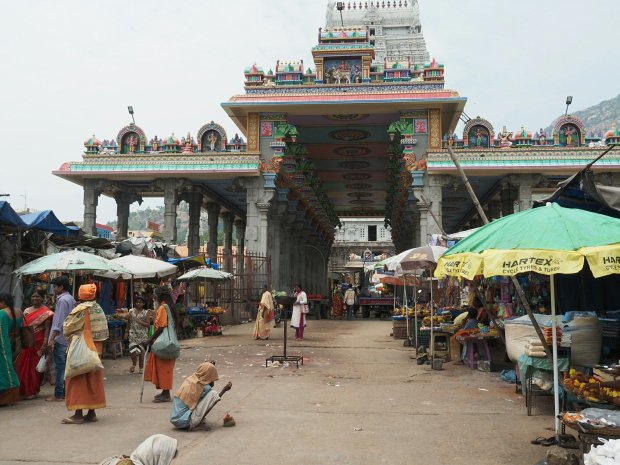 This was our first experience with people trying to get things from us, but mostly they wanted to take selfies with us. This was so confusing at first, that we refused the first ones. I feel bad, now, because that first young girl asked very nicely. It’s just that I was still stepping out of the SUV, and it felt very abrupt. 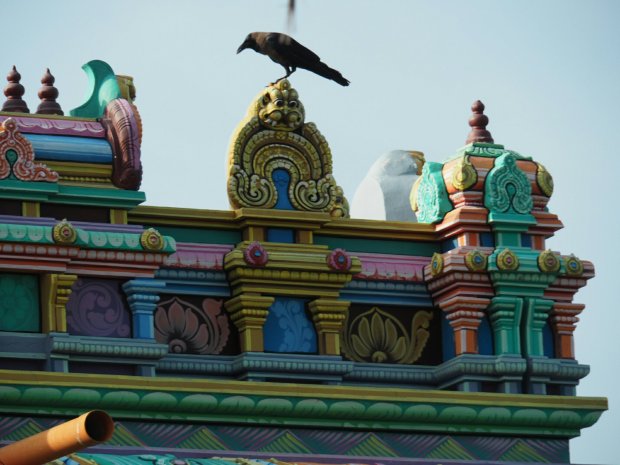 I am very taken with the crows here. They have gray heads, and like all crowd, are very clever. I may have been having a little discussion with one earlier the day I wrote this. After the temple, our driver took us to a nearby ashram, where we learned more about Sri Maharsi. This person was a teacher whose story starts at age 16 when he felt, for the first time, the fear of death. This info was being hand-lettered where we received the blessings, but was incomplete. Here it is, now, though, if you would like to read it. 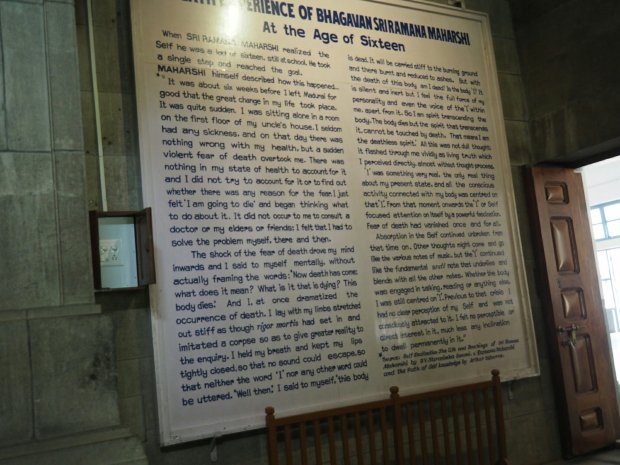 The ashram was very peaceful, and was on a route that would have been part of this story had we arrived only 2 days earlier. Every full moon, many hundreds of Hindu walk around the entire mountain. Our driver made a point to drive us along part of the route, where we saw many shrines and monkeys and sadhus (like crazy hermits). I asked him if he’d ever walked it, and he looked surprised and answered no, that it must take very long. 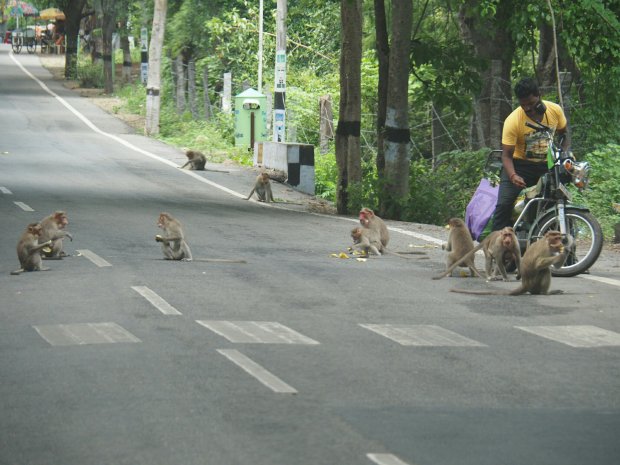 But he also had an offering to Buddha on the front of his jeep, so maybe he’s not that much a Hindu. (Things here, like many places which practice some form of Buddhism, are very mixed, so you never really know. He was happy to talk about his small Ganesha statue on the dash and pendant hanging from the rearview mirror, both of which had fresh flower garlands. They must have worked, too, because we certainly encountered no obstacles.) 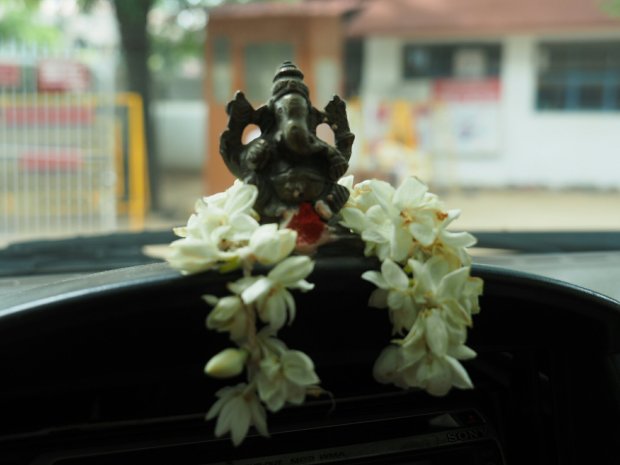 Before leaving town, our driver recommended a lunch place which was wonderful. Delicious momos (small dumplings with various fillings, if you’ve not had them before) and some Indo-Chinese fusion stuff that was excellent. And then we sped onwards towards Pondicherry. 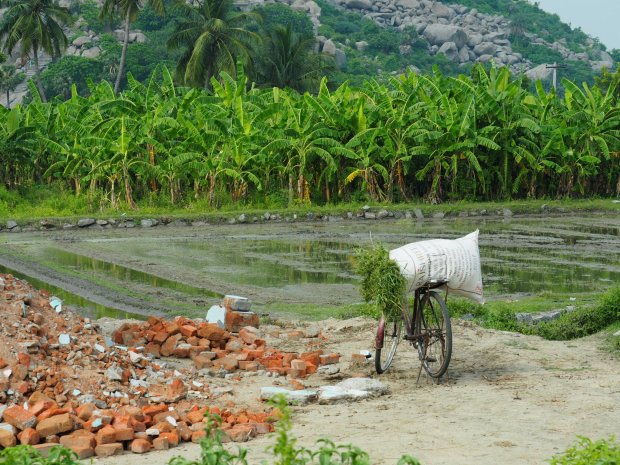 We got a little lost coming into Pondicherry, so we passed a school science fair. More on that tomorrow! Our hotel, recommended by a friend of Abbie & Derek, is Les Hibiscus, and it’s exactly the kind of place I love. Colonial furniture, lots of green plants and interesting touches. It is very similar to my favorite hotel in Chiang Mai, where I’ve now stayed 3 times. Similar price range, too. If I ever return to Pondicherry, I would stay here again. 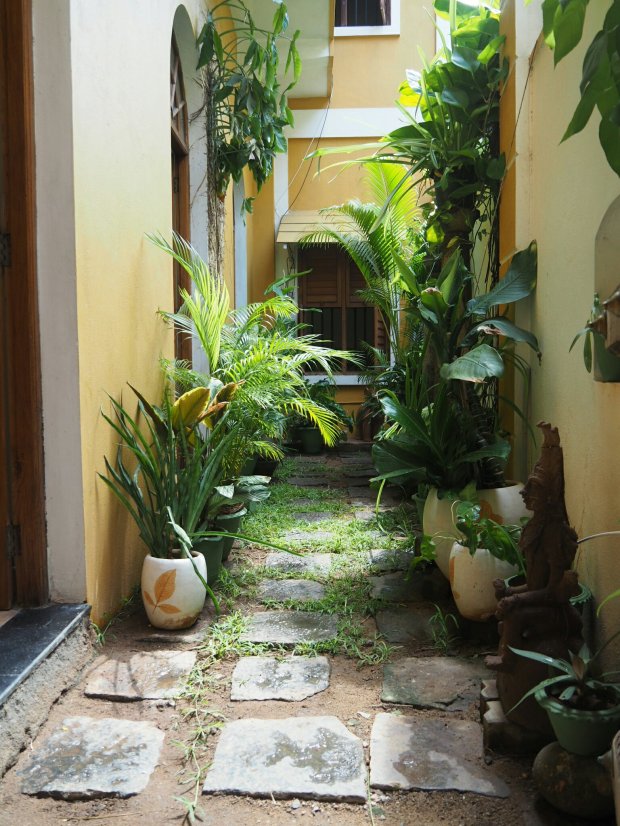 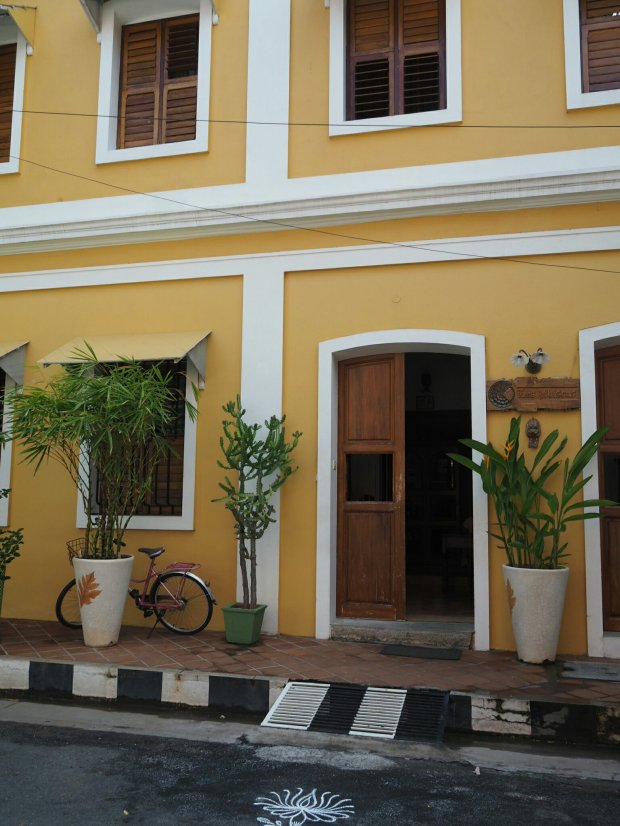 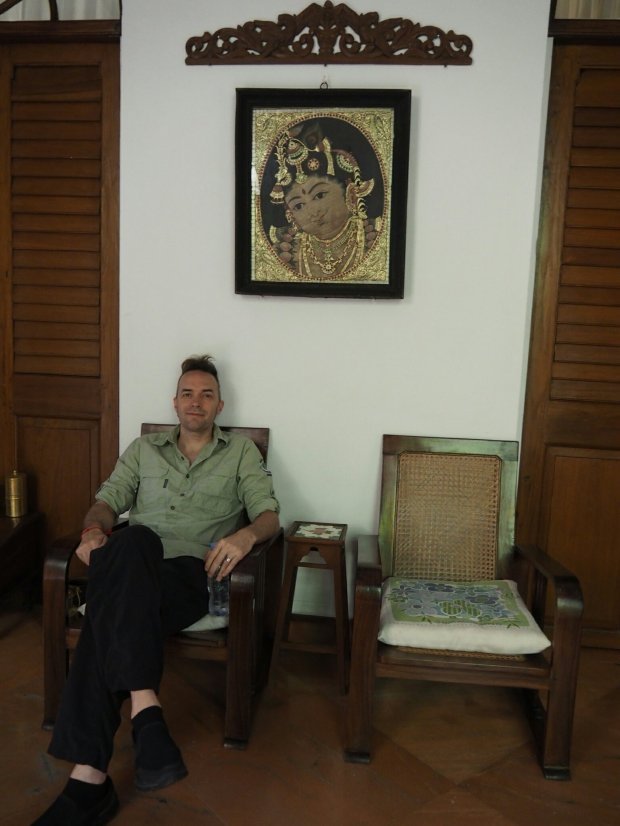 We all had a rest, then walked to the boardwalk to get a feel. Like the beach in Mamallapuram, the entire town and all its visitors were there, parading and taking pictures. Many wanted to take selfies with us, so we finally learned to get into it. 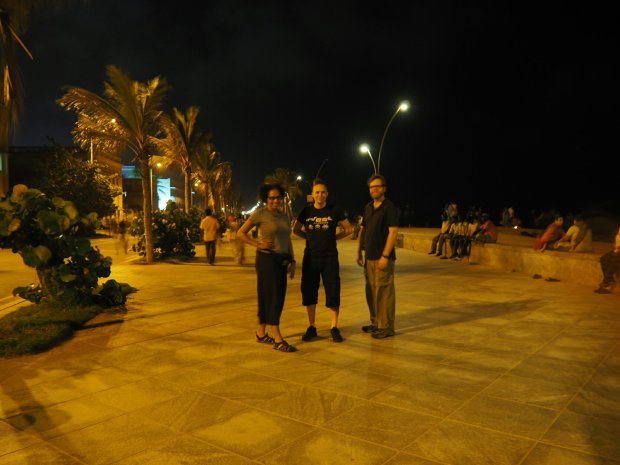 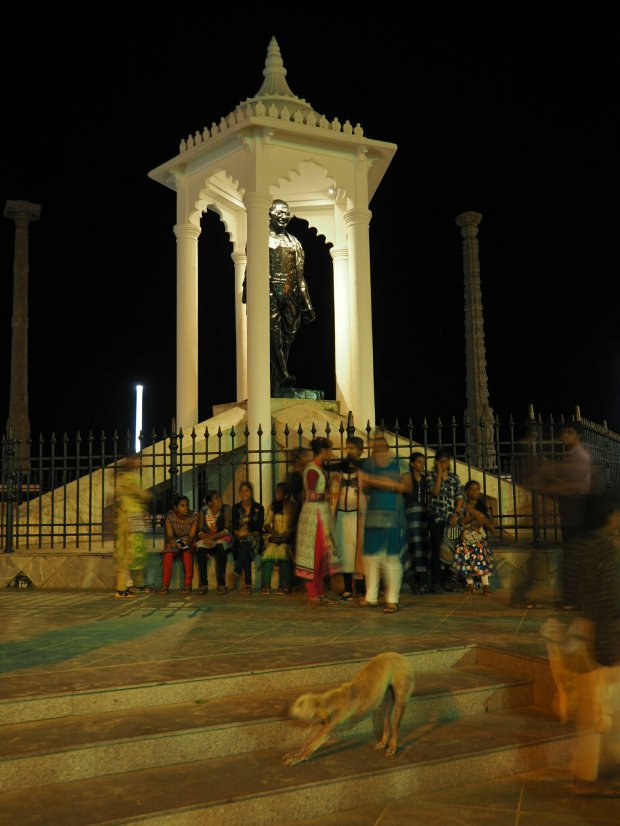 After a promenade, we went for dinner and drinks at a low-key place near our hotel. It was a lovely day all around! 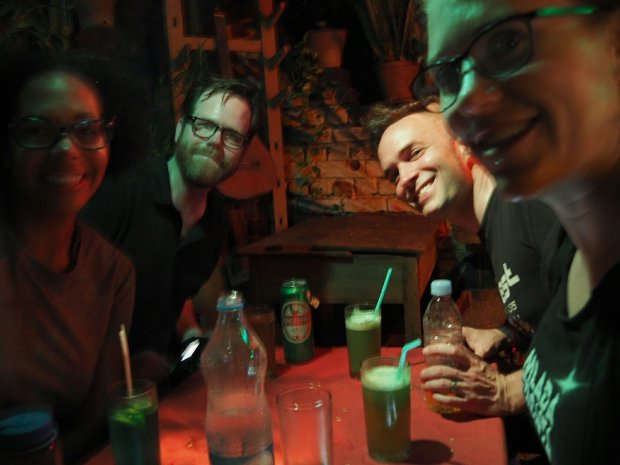 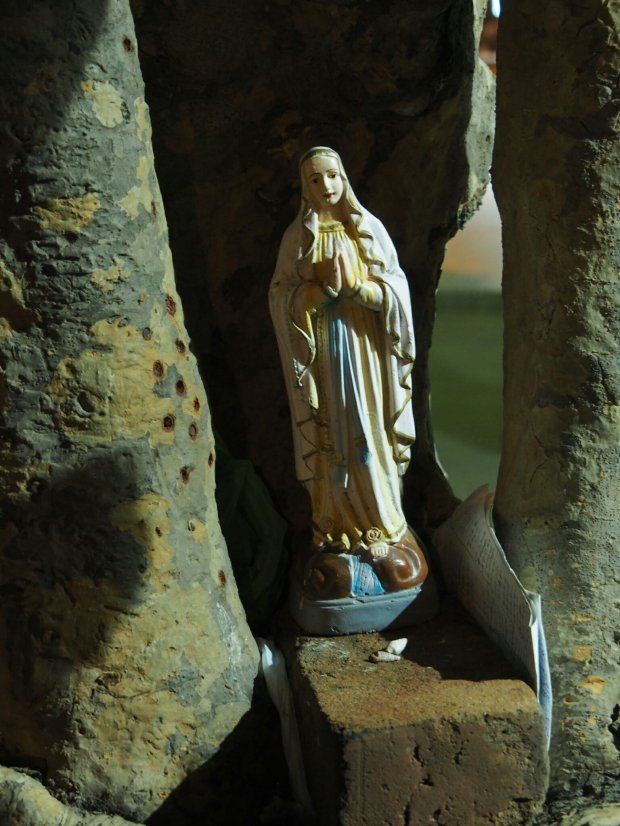 Because Pondicherry was a French colony town, there’s a strong Catholic presence. This was tucked into a tree, but Ganesha was in the next tree.