Last year, Matt and I traveled to Portugal for the first time–a weekend trip to Oporto. I love port wine, and we’d gotten some recommendations from our local wine supplier about things to do while there.

The first day was fabulous, but the second day it rained so much we didn’t get to do much more than hang out in various bars drinking and munching.

I’m starting to think that’s all Portugal has in store for me.

Part of why I planned this trip was because visiting Oporto had made me interested in traveling the Douro valley, which is the river upon whose mouth Oporto and its sister city sit. I wanted to motorcycle around, spend a few extra days, try the other wines produced here.

The rain made that idea insane. Instead, Dick and I booked an all day tour with Paulo. Paulo’s family bought a wine-producing farm about 30 years ago, as a hobby. He himself (our age), studied and taught mechanics and sustainable energy, but the crisis hit and he couldn’t get enough work to support his family.

His family’s farm, on the other hand, was doing very well, winning some awards. So he thought he’d take tourists on his boat (he had a smaller one then, which he still has), and to his farm, and serve lunch on the farm, and whatever else they’d like to see.

This business has flourished, and Paulo was awesome fun.

He picked us up at our campsite in the morning, and drove us to where he boat is docked in Pinhao. We traveled downriver in heavy current (the dam is open because of so much rainfall), drinking port wine his friend makes. It took us much longer to get back, against the current, and the rain started, but we weren’t bothered. 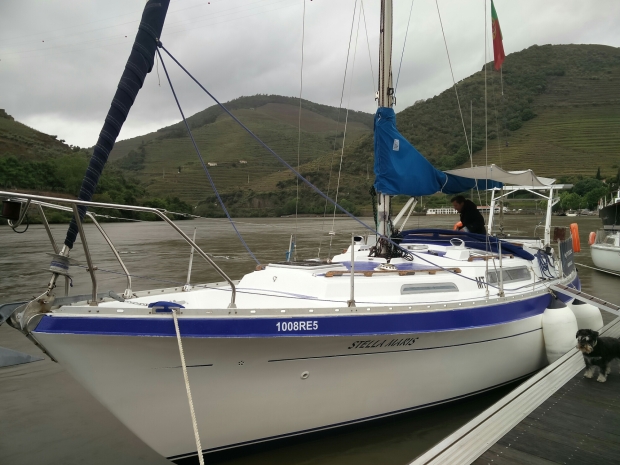 Then he drove us to his family’s farm, where we had a tour of the wine-producing process. His family only occasionally makes port wine, but has a white table wine (actually intended for on boats, nice and light), and a couple of different reds, and has also produced some special wines for particular events. All the labels have special stories.

He showed us his own little wine-making, which he does for fun alongside his parents’ larger operation.

We had lunch in the converted church on the property. It was a strange place. No one lives there, but it’s made up to look like a home. All the windows face north because it keeps it cooler in the summer. We tried all of the wines and also the port.

After lunch, we walked around in the vineyards and played with the dogs. Then we drove back into Pinhao, where we had coffee at a cafe Paulo likes to hang out in.

Finally, he asked what we were planning on doing for dinner, and when we said we were hoping he could drop us in Vila Real somewhere, where we could eat and then taxi back, he suggested we go to his favorite place altogether. We had very tasty francesinhas (a sort of over-the-top toasty, possibly a Portuguese interpretation of a croque monsieur — look it up), and lots of beer.

All in all, it was a great day, and redeemed Portugal for us. We still planned on getting the hell out of the country the next day, though.