For our ride today we utilised to our benefit the ancient secrets of the Amsterdam rain gods: wear rain gear and see no rain!

Not quite true, actually. We got a few sprinkles and some very dark overhanging clouds, but it was a lovely ride south from Lugo. I will have to look up Ourense in my guidebook later. It looked like a very pleasant city. Of course, it was Saturday between two different storm fronts, so everyone was out running and taking advantage of the temporarily clear skies, but our small highway (we skipped the main highway) took us right through, along the river, and I got the impression of lots of green spaces and a lot of relaxation. 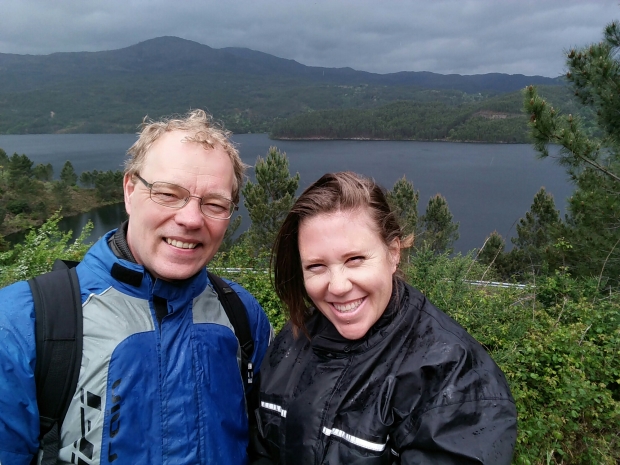 The last bit of Spain before we entered Portugal was a national park, and like all other parks before, it was lovely. It reminded me of a bit of the forest in Snoqualmie pass, where years ago Lynn C (to distinguish her from Lynn L, who will join me next week) and I went overnight camping in a van sometime in the 90s. 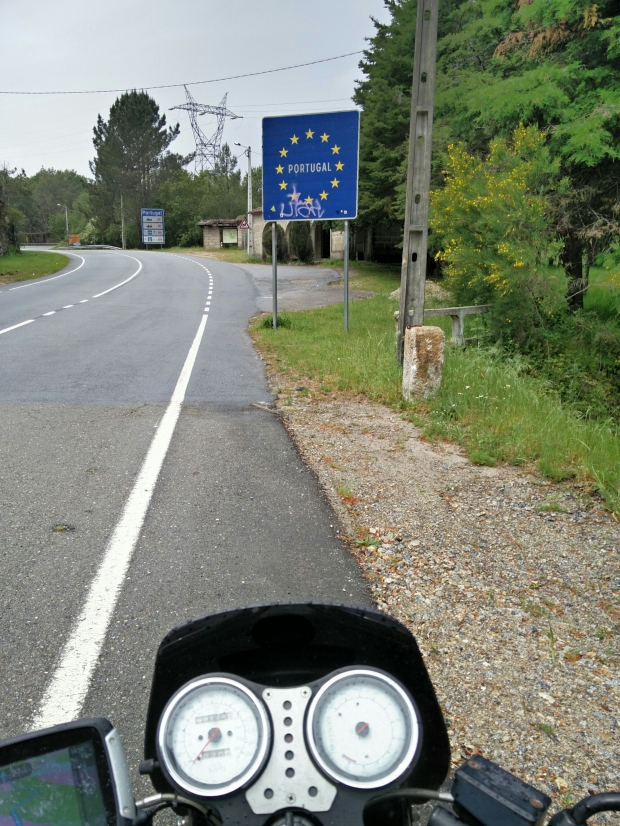 One major difference, however, is that although you have lots of lovely hills and gently winding wide roads here, with lots of trees, mostly evergreens (I’m not as good as some people I know at distinguishing types of trees at a distance at speed) and some deciduous, with ferns everywhere, occasionally I’d round a bend and see a palm tree. 😀

Something else I’ve seen a lot of on this trip: One Tree Hills. Fortunately, I don’t know most of the words to that song, so it hasn’t been in my head. Today I mostly had the Beatles in my head, strangely enough. I can’t remember which song. Right now we’re in a cafe-galerie and The Doors are playing. We are eating a really awful cheese platter and drinking some delicious Portuguese beer.

Observations on Portuguese driving:
1. Stop signs are apparently just a suggestion. I thought I was about to be hit from the side several times in the short drive from the border to Braga.
2. Roundabouts, although common, scare the shit out of them. They slow nearly to a stop at each approach, but then accelerate so hard with swerving and nonsensical lane changes that it’s impossible to predict what they will do.
3. They are nowhere nearly as good at road communication as the Spanish. No turn signals, no moving to the side to let someone they think is going faster pass easily, and much more tailgating.

Separate observation not only reserved for the Portuguese as a group, but also observed in Spain:
It’s odd that in two countries with such gorgeous terrain, you get so many people who are apparently terrified to drive on curvy roads. Speed limit: 90. Suggested speed for upcoming gentle curve: 60. My comfortable speed, on a motorcycle, because the road is wet: 50. A few cars in both places: 25 and swerving nervously all over the road, slamming on the brakes mid-curve. This is actually really dangerous for me, because even if I’m following at a good distance, the sudden braking usually decreases the distance just when to be safe I should be accelerating, not braking. So I have to increase my distance even more, which means someone else gets frustrated and starts tailgating me, or passes me, then stuck behind the other person, then causing the same problem all over again. Argh. Sometimes I want to pull people off the road and explain to them why they are causing more of a road hazard in their attempts to be careful. I’m hoping that they are actually not locals, but in rental cars (plates were Spain and Portugal) or borrowed cars, because if you live somewhere like this, you should know better than to ride the brakes this much.

Enough road talk. We made it to Braga, checked into our hotel, got an apparent upgrade to a corner suite, and went for a walk just as the rains came down. I had the foresight to ask if they had any extra umbrellas just as we left, and they lent us a small one. Our heads stayed dry while our butts and legs got soaked. Not really true, as I’m wearing a skirt. The skirt took most of it. Dick says he’s all wet, though.

We tried to go to Vodafone for prepaid sim cards, but it was closed (after 13:00 Saturday), then we stopped for a coffee and to get our bearings. I used my first Portuguese phrase — badly, but it amused the older man who made our coffees.

Then we walked into the center, and it rained harder, so we stopped for another coffee and very very sweet pastries, yum! There was no point in using Portuguese here, as the people were all very used to stupid tourists.

After that we went to the Museu Pio XII, where we looked at ancient Roman things from this area and of course lots and lots of Virgin Marys. Then we climbed the tower and looked at another Mary, and the view. It was a view of wet.

From there, we walked to the Sé Cathedral, where people were entering for Saturday evening Mass. 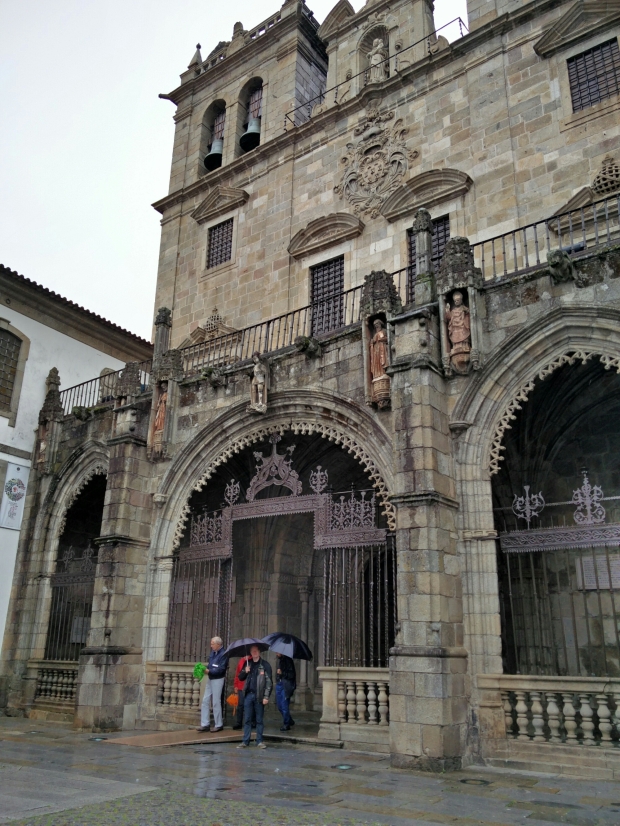 There was a handmade guitar (and guitar-like instruments) store on the same street, so we went in and admired them. Most of them were quite affordable as well as beautiful, but Dick’s left hand fingernails were a little too long (and I suspect he was shy), so he didn’t want to try one.

The rain was worse when we got out, so we went across the street where we are having beer as I write this.