When we loaded up our bikes this morning, I felt a bit overwhelmed.  My bike looks overloaded. Much to my relief, then, later in the day, to run into another pair of bikers, also heading from the Netherlands to Spain. The taller man, on his Kawasaki 750, had also recently updated his baggage, and was pleased to show it off. He is planning 6 weeks versus my 7, and is also prepped for camping. His luggage consisted of 4 matching bags on the back, plus a chair strapped on and a few other things. I mostly remember the matching set, because he was most proud of it. Mine is 2 pieces of very large waterproof luggage on the back, a small waterproof tank bag, and also a chair strapped on the top. Here we are,  ready to go:

It was extremely cold, but clear,  all day.  Matt got too cold, because he forgot to bring his warm segments for his pants and jacket. Oops. In the end, he put on his outer rain jacket and pants, and I leant him my glove inserts.  I was perfectly warm, having started the day with my electric under jacket plugged in,  and my medium-level gloves. I might look like the Michelin Man, but I’m cozy.

It was an easy length for our first day. Could have taken us 4 hours but was closer to 5 with comfortable stops for gas and toilet.

Sedan is home to a huge castle, where Matt has stayed before on a work trip. This time could also almost be a work trip for him.  There’s a hackathon happening this weekend!

We had got in early enough to go check out an art gallery I’d heard of that struck my interest, but a sign on their window said that they were at an exhibition with other artists and galleries, so we went there instead.

We almost turned away, because it seemed to be a Lion’s Club event, not an art event, but a man caught us and explained that yes, we had the correct location, and Lion’s Club is hosting the event.

I have to say, and I’m no expert, but most of the works on exhibit were pretty amateur. But there was someone exhibiting frame gilding, which was interesting, and the Stackler gallery,  which is the one I’d known of, had some intriguing stuff, and we were long busy admiring some woodworking, when the woodcarver himself came to chat with us. A long conversation ensued in which he and several other lovely elderly people spoke very patient French to us, to which I mostly replied in Spanish, and often used charades.  🙂 Anyway, it was fun. They were sweet. We took his card, because we are actually interested in a couple of his pieces, maybe. Matt was so enthusiastic he gave Matt a handcarved top as a present.  😀

Finally, we returned to walk the wall of the castle, admire the bikes, and have a delicious meal in the restaurant. (Bikes in bottom left corner.) 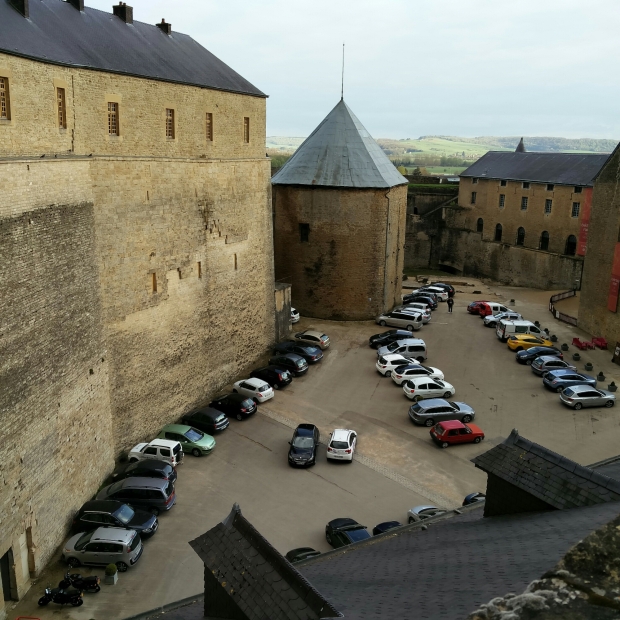