Thursday.
I was thinking I’d been here before, but that they’d finished renovation and the bathrooms had been upgraded. But as I sat down in the shade to write about it, I realize that I’m wrong. The mountaintop wat that Matt and I had visited had a gigantic white Buddha in the middle, or something like that. Anyway, it was all white, not all gold. This is all gold, shining very brightly on this sunny day. 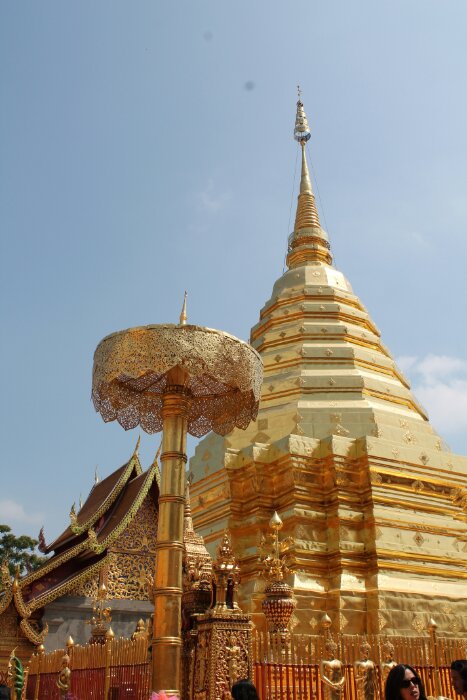 On the way up. Why have a railing when you can have a dragon? 🙂 awesome! 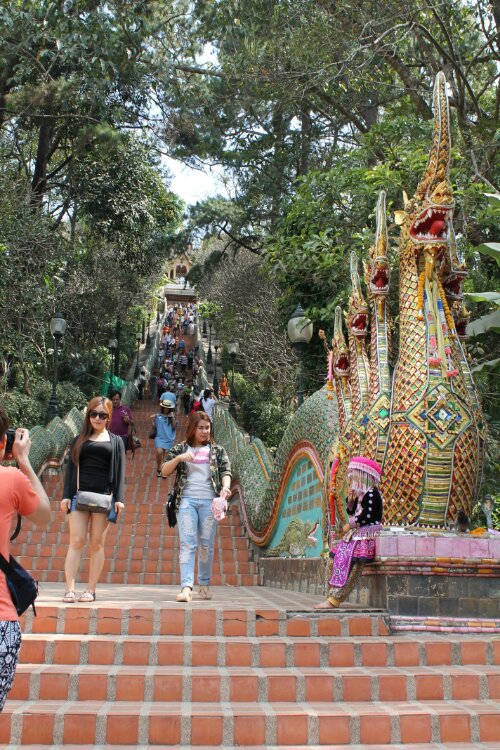 I love the bells.

So, that little sign says don’t touch the bells in Chinese and English. I guess they figure Thais know better? Anyway, guess what all the tourists were doing? That’s right. Ringing all the bells.

On the way back down, I can’t help by being entertained whenever I see monks doing perfectly mundane tasks. It’s not like the only thing they do is meditate. Monk with weed whacker:

It’s the dry season, so there’s a haze over the city below. I could taste the air changing as I wound my way up the mountain on that little Kawasaki. What a relief. I’ve been wearing a dust mask while driving around all week. I don’t need it up here.

Yes, I’m skipping class. I’ll be skipping tomorrow, as well. I decided this when my alarm went off this morning and I was already awake.

I had a very good day yesterday, but although I think the content of what Pichet is trying to teach, both in massage and philosophy, is relevant and good for me to learn, his methods of teaching are not for me. At least not right now. He keeps saying we should listen to our bodies, and mine is telling me to get the hell out of there.

Since beginning at his school, my body is exhibiting all the signs of stress that had completely disappeared in the time I’ve been here. My hip and leg are aching all night long, waking me up with pain, I’m emotionally very sensitive, and I’m losing my ability to let minor irritations wash over me. I do not want to see Matt for the first time in weeks in this state. I want to be the happy relaxed me that the first 2.5 weeks of this trip helped restore. So I’m taking these 2 days to relax and heal, starting with an escape to the mountain air. Riding a motorcycle always feels awesome.

I forgot to get gas before leaving town, so I won’t be cruising around indefinitely. That’s fine. I’m parked in the parking area below the temple and can easily spend several hours around here. Since I should be able to mostly coast back down, I’ll make it back OK. The early warning light hasn’t come on yet.

Later. Indeed, my early warning light came on as soon as I was aiming downhill. I knew it was probably the angle of the tank, but to be on the safe side, I put it in neutral and coasted the whole way down. This had the interesting effect of making me even more aware of other people’s comfort zones in driving. Every time there was a relatively straight or flat bit, I fell far behind the cars and bikes ahead of me, but since they braked hard at every curve or steep patch, I always caught up again. And no one was behind me the whole way down, so I guess I never was slow enough to be caught up to, either.
The air quality gets worse later in the day, so already I could taste the dust before leaving the parking lot. It worsened as I continued down the mountain. I asked a kid on a scooter where to find gas, and he pointed, but it was all the way back on the moat ring, so it’s lucky that I was right about the tank being at an angle. I was damn close to empty, anyway.

I rode out to Wararot Market but didn’t find anything I needed, including food. I’d tried to buy a bamboo sticky rice at the temple, but the old lady just ignored me. She ignored my money. She ignored my, “Kator ka” and my “sawadee ka.” So I gave up. I’m not that into sausage, except dry sausage, which I adore, and that was the only other thing up there.

So I drove to the other side of the river, and had a nice view, pleasant atmosphere, tasty watermelon juice, and mediocre softshell crab curry at the Good View cafe. My waitress was surprised when I asked for chilies. In my opinion, my taste for spicy is pretty medium, but they serve everything so mild here for foreigners, and seem so surprised every time i ask for chilies that I start thinking I’m really exceptional. It’s weird. 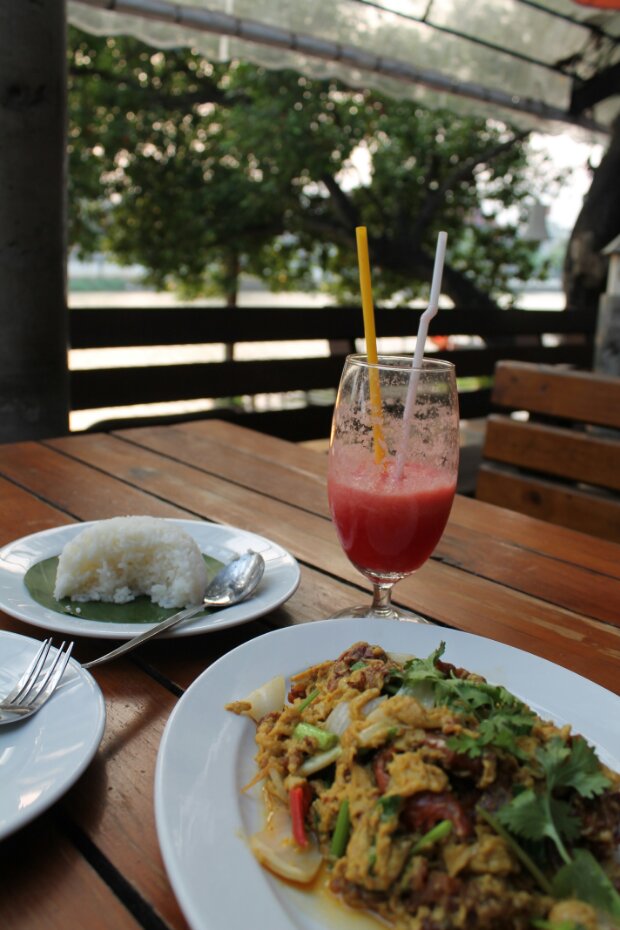 Anyway, the next stop was the blind massage salon, for another 2 hour session. Banya decided to get my back under control this time. Holy moly! He also worked my bad leg a lot, which was great. I could tell it still needed more, though. I will go to Lek Chaiya again in the morning. I trust that little old lady there. She’s got me exactly.