I’m a little rough around the edges today. My confused body clock combined with itchy mosquito bites to wake me up around 02:30 and keep me up until 04:30 or 05:00. Consequently, I reset my alarm a little later, then hit snooze a few times, then just lay in bed unable to get my ass up. This behavior meant I didn’t have time for breakfast before class.

I took a different route to school this morning, eating dried mangoes as I walked, then got there in time for coffee across the street before it was time to go in. Even so, I was there before Napa, or indeed nearly everyone. Her sister was just arriving, but the screens were drawn on the Ruesri Datton building, although later the creepy-eyed Frenchman emerged from behind them. I wonder if he slept there. He seems to be very familiar with everyone and the procedures. His teacher, with whom he is currently studying foot reflexology, also appeared around that time, from inside the massage building. 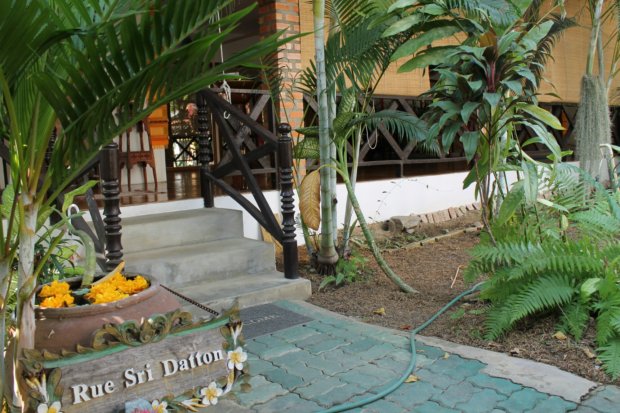 As I drank coffee, one of the 2 Japanese girls arrived. I didn’t expect to see her, but that was very nice. I can’t believe I’ve already forgotten her name. It started with S and ended with mi, but that’s all I currently remember.

We started as before with the chanted prayer to thank Shivaga, the father of Thai massage, then the meditation and warm up series from yesterday. Today, Napa encouraged us to really look at ourselves in the mirror, to see where we were off-balance, in order to improve it. My right hip sits higher, although it’s usually my left where I notice problems. Class was harder today, but I did OK. More balancing on one leg, which was hard with my left ring toe injured.

Oh, and snack during the break was tamarind seeds, jujubes, and boiled peanuts. Yum. 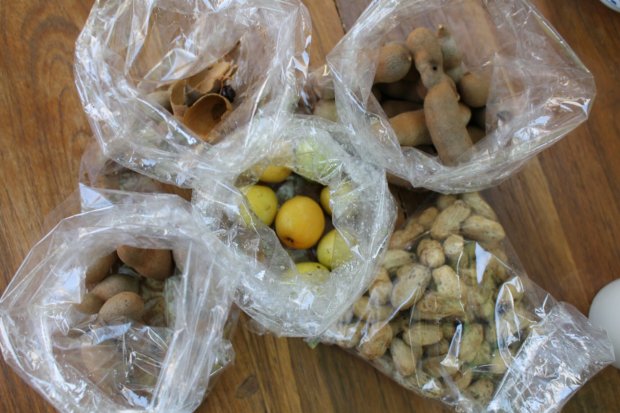 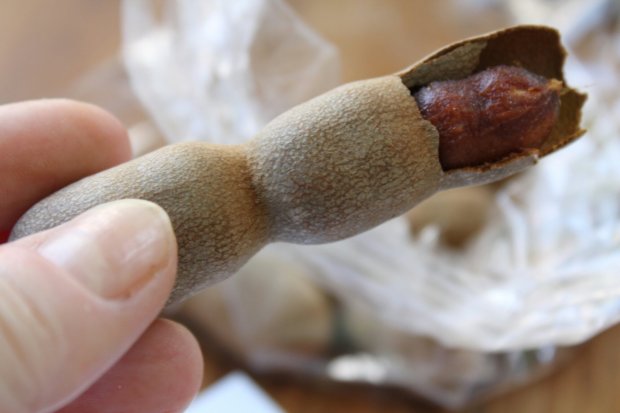 After class, I had an excellent pad thai at a small shack on a quiet street. I haven’t seen any pad siew yet, strangely, which is Matt’s favorite, and I’m easing my stomach in gently with noodle dishes. They’re cheap & filling. Lunch took quite a while, but I heard her chopping everything fresh back there. She made it very mild for farang, not because I asked, but the German family next to me did, and they also ordered the same. There were dried chilies and chilies in vinegar on the table. I used both liberally. Yum.

Then straight back home to rest! I deliberately wore a tank top today, to prevent me entering any wats, so that I could get some rest.

Around 5, I headed out for the Saturday Market. First a massage. I chose a random place, the first I came to on a small street. It was good, but not nearly as good as the blind guy. I didn’t get the impression that these ladies enjoyed their job quite as much. They were proficient, just bored and impatient. There was no rhythm, which I always find really telling. Rhythms can be different, but if there isn’t one, the practitioner is not really into what they’re doing.

WARNING: if you’d rather not read about menstruation & massage, skip this part until the next ALL CAPS spot. This is my blog about my massage training, though, so this is relevant to me.

When I arrived, I told them that I was on my period, which usually tells them not to cut off circulation to the legs, or to massage the abdomen. The reasons I’ve heard are as follows:
– heavier bleeding
– wooziness, possibly even fainting
– possibility of a longer period, by a day
I have even heard that you should avoid it altogether, due to the stretching. I have taken most of this with a grain of salt because no one tells you not to exercise or stretch during your period. And while I’m sure that the abdominal detox massage would have been too intense during menstruation, a light version of the normal stomach application can be quite beneficial in relieving cramps. Or so I have felt in the past. To be on the safe side regarding the heavier bleeding, especially as I was on day 2 and heaviest already, I put in a fresh tampon right before we began. In the interests of science, I also changed it a little more often than I thought I normally would.

Even after having told her, she cut off my circulation, not just once, but 8 times to each leg. 8 times. I think that the most I’ve ever done is 3 times per leg. And they were effective. I could feel my pulse against her hands then the rush of warmth down my leg when she released. It’s not as if she missed.

Results? Nothing. No extra bleeding during, nor immediately after for many hours. As I’m finishing this the next morning, I would actually say that if anything, it’s lighter than normal, but I think that’s circumstantial. Further, I’m experiencing fewer cramps than normal, but as that’s variable, I’m again not attributing it to the one normal abdomen massage I received from the blind man. It’s more likely related to the Ruesri Datton, if I were to guess. Or complete happenstance. As for whether the duration is lengthened, well, we’ll just have to wait and see.

My masseuse changed halfway through, and when I mentioned that I was going to the market, she offered me a lift on her scooter. In retrospect I should have agreed, but I was worried that I wouldn’t remember my route, and couldn’t get back. I shouldn’t have worried, as it turns out I was already lost. I ran into her again layer, though.

It turns out that I left my map in my room, so while I did find a market, it wasn’t the one I’d been aiming for. It was just a small neighborhood food market, no other farang in sight. I bought a bag of tamarind seeds, for munching on whenever. The woman at the next stand liked my hair.

Then I bought a bag of yummy-looking cellophane noodle stuff with a vegetable I couldn’t identify in it. I ordered it because several other people ordered it, and the stand was popular. 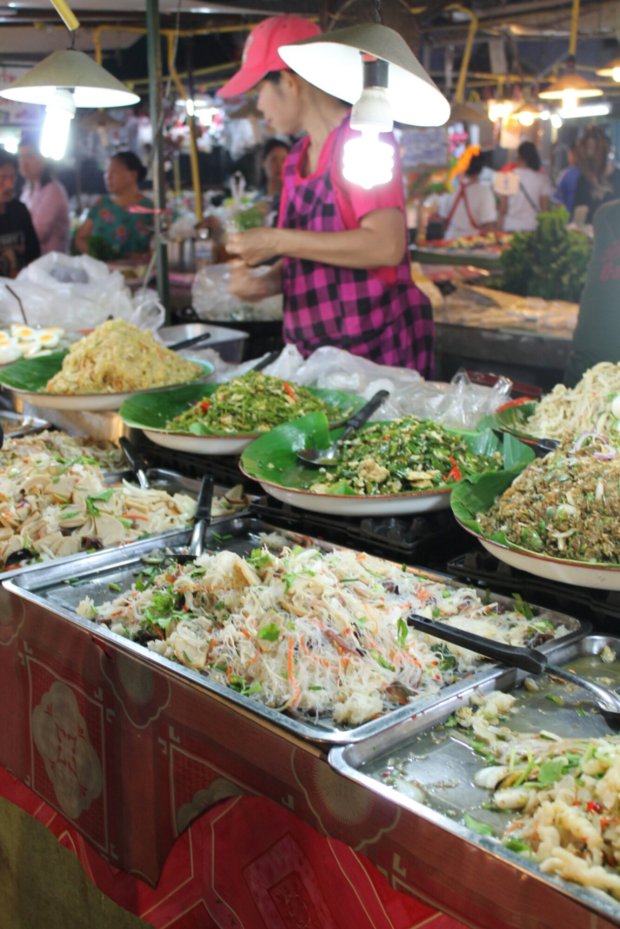 Unfortunately, this market is clearly for locals. People were taking individual portions away in bags on their scooters. I was given a bag, but nothing to eat the food with. In the end, I decided this was likely to happen again, so I bought a package of sporks from a stall around the edges. Now I’m set for eating on the roof terrace whenever I like as well.

I found a place to sit, but didn’t really care for the dish, so after only a few bites, I tossed it in the trash. I was sure I’d missed the correct market, but without the map I didn’t know where to look for it, so instead I decided to head for the Night Bazaar. After all, Napi said we’ll start an hour later tomorrow, so I can sleep in. She hasn’t decided if she will vote or not (she’s feeling that the situation is irredeemable and nothing will change anyway), but if she does, this will give her time before our lesson.

When Matt and I were in Chiang Mai 3 years ago, we were none too impressed by the Night Bazaar. It seemed far too commercial for our romantic notions of what a night bazaar should look like. This time, knowing what it was, I was able to enjoy it very much. Besides, I had a mission: I needed sandals.

But let’s just awkwardly segue here, to ice cream! I saw this stand:

I mean, just look at those! They’re insane. They make curls of ice cream, which they stand up on end into a dish. Add whipped cream and toppings, and voila!

First step: chop up the ice cream base flavor and the special flavoring. This is for the girl before me: oreos were chopped into chocolate ice cream. Mine was coconut jellies into Thai ice tea ice cream.

Second step: spread it out flat onto freezing surface and curl it into cylinders.

Then add cream & toppings, finished product!
Mine: coconut jelly chunks in Thai iced tea ice cream, topped with whipped cream, caramel syrup, and Kit Kat’s. No, I didn’t invent it. I picked it out of the display.

After the ice cream, I realized that although I knew where I was, in that I remembered the square, which was the same one where Feigal family friend Nick the dentist took us for seafood and special ordered that amazing soft shelled crab curry. However, I had no idea which direction was home, so i hailed a tuktuk. My driver got confused getting back, so we cruised all over town for quite as while, which was fun. And since we’d already negotiated a price, I didn’t mind at all!

At home, surgery was needed in order to make my sandals fit. I hadn’t found any which were wide enough but not too long, so in the end, I cut them to where I needed them. I also cut my finger, when I turned the knife the wrong way then pressed firmly. Small wound, easily bandaged.

And then it was bedtime. 🙂